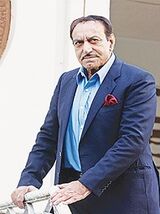 
Mustafa Qureshi is a renowned Pakistani film actor and Politician who is a member of Pakistan Tehreek-e-Insaf since 2018. Mustafa has worked in many movies as a Villian and earned immense importance and esteem. His only son Aamir Qureshi is also acting in Pakistani dramas. This article has all the information about Qureshi, including Mustafa Qureshi Biography and Mustafa Qureshi Family. Mustafa Qureshi is a senior Pakistani film actor who is also serving as a Politician for a long time. He is attached to Pakistan Tehreek-e-Insaf since 2018, while previously, Qureshi was associated with Pakistan Peoples Party. He is known for portraying the role of ‘Noori Natt’ in the blockbuster movie ‘Maula Jatt.’ He has acted in many notable films for which he was awarded Pride of Performance and Nigar Award. Mustafa has ruled the box office with his successful movies for a long time.

He opened his eyes on 11th May 1938 in Hyderabad. Currently, Qureshi is living in the same city.

He did his Schooling from his home town Hyderabad. After bachelor, he went to Sindh University from where he attained the degree of Masters in Islamic History.

Mustafa was born into an educated and non-artistic family. He got married to Rubeena, who was a Sindhi Folk singer. Both blessed with a Son Aamir Qureshi, who likewise belongs to the Entertainment industry. Aamir is an actor and musician.

Mustafa joined Pakistan People’s party after he met with late Zulfiqar Ali Bhutto. He influenced him in a great way. Mustafa remained the head of the party’s culture wing in the past. He endured one of the committed members of the Pakistan People’s party for many years. However, with the party’s evolution, he became dissatisfied with the new policies and decided to quit the party. In 2018 he joined Pakistan Tehreek-e-Insaf with new hope.