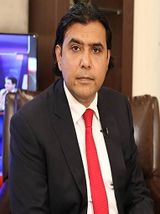 Mustafa Nawaz Khokhar who remained the part of Pakistan Muslim League Q for a long period of time than he joined Pakistan Peoples Partyy on demand of Asif Ali Zardari and currently he got the ticket of a Senator and will be in SEnate Elections of 2018. In November 2016  a relatively young Mustafa Nawaz Khokhar was made information secretary from central Punjab. He belongs to an influential family of the Potohar region and his father, Haji Muhammad Nawaz Khokhar, has also served as deputy speaker of the National Assembly. Mustafa Nawaz was made an advisor to the prime minister on human rights during the last PPP government. Since getting the office of Information Secretary of PPP central Punjab, Khokhar started playing a vibrant role for his party as he regularly appears on the TV talk shows giving the opinion of his party on different issues in a very effective manner. Mustafa Khokhar also played an important role in organising the PPP’s foundation day celebrations in Lahore’s Bilawal house last year and the recent show of power by PPP in Lahore’s Nasir Bagh against the load shedding. [1] Biography Biography

President Asif Ali Zardaris meeting with former deputy speaker National Assembly Haji Muhammad Nawaz Khokhar in October 2011 had given major twist to the pre-elections politics ostensibly to counter PML-Ns deepening blitz against the ruling PPP .President Asif Ali Zardari  persuaded the former legislator from Islamabad to join the ranks of the PPP . However Haji Nawaz Khokhar rejected the President Zardaris offer on the pretext that he would remain part of the PML-Q, sources quoted him as telling the PPP co-chairman. Haji Nawaz Khokhar said he has decided to contest next general elections from Islamabad while his son Mustafa Nawaz Khokhar , Advisor to the Prime Minister on Human Rights, would challenge the Leader of Opposition in the National Assembly Ch Nisar Ali Khan in Rawalpindi district. [2] Refuse to join PPP

Mustafa Nawaz Khokhar took part in the general elections as a PPPP candidate from NA-48 (Islamabad-II). He lost in these elections as Dr. Tariq Fazal Chaudhary got 94106 winning votes. The runner-up was Chaudhary Ilyas Meherban of PTI with 57383 votes. [3] Elections 2013

The Industrial Area police in April 2014 booked former adviser to the president on human rights and PPP deputy secretary information Mustafa Nawaz Khokhar for carrying prohibited weapons without permits.  Officials of the Islamabad Traffic Police (ITP) spotted some vehicles, including a double-cabin, on Expressway in which armed persons were travelling. The officials alerted the police control and asked to check the vehicles. In response, the vehicles were intercepted near I-8 signal. “Politician Mustafa Nawaz Khokhar disembarked from one of the vehicles and asked the police about the reason for intercepting him,” the police said. The SHO told him that they wanted to search the vehicles. After the search, when the police asked for the permits and licences of the weapons, Mr Khokhar and the armed men failed to produce the documents, the police said. However, they told the police that the documents would be brought from Mr Khokhar’s residence later. The police then let the vehicles go without taking any action. [4] travelled with armed gun Pakistan People’s Party (PPP) has issue tickets for upcoming Senate election. According to report, the tickets have been issued to Raza Rabbani, Maula Bux Chandio, Murtaza Wahab, Ali Jamote, Mustafa Nawaz Khokhar, Imamdin Shokeen and Ayaz Mehr from Sindh. On technocrat seats, the tickets were issued to Dr Sikander Mandhro and Rukhsana Zuberi. For women seats, the tickets were allotted to Krishna Kohli and Quratulain Marri, and for minorities, Anwar Lal Dean was granted the party ticket.

The  PPP clinched 10 seats including five general seats, two reserved seats for technocrats and women each and one for non-Muslims to take its total strength to 20 against the expectation of 17. Successful PPP candidates on general seats from Sindh include sitting chairman of Senate  Raza Rabbani,  Maula Bux Chandio, Mohammad Ali Shah Jamote, Mustafa Nawaz Khokhar and Dr Sikander Menghro.  Rukhsana Zuberi and  Dr Sikandar Mandhro won the technocrat seats while  Anwar Lal Dean won the seat for minorities.  Quratulain Marri and  Krishna Kohli won the election for the reserved seat for women. PML- F candidate Muzzafar Hussain Shah’s contacts with two  MQM factions and the  Pak Sarzameen Party also worked to save his party’s elimination from the upper house as he bagged one seat.[5]  Senate Election Results 2018