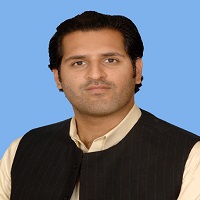 Muhammad Zain Elahi is a Pakistani politician who relates to a notable family. His father Tahir Sadiq Khan and uncle Chaudhry Shujaat Hussain earned a significant name in the politics. He held the title of the youngest parliamentarian who became MNA in 2013 but alter Sania Ashiq grabbed the position of becoming the youngest MNA at the age of 25. This article has all the information about him, including Muhammad Zain Elahi Biography. Zain Elahi is an educated Pakistani politician and is known to be the youngest parliamentarian of 2013. He is a former member of the National Assembly who contests the elections as an independent candidate. A few of his family members also belong to the political career.

He was born on 15th April 1987 in Attock. For his education, he also lived abroad for a few time.

Zain holds the graduation degree that he obtained in Global Management from the University of United Kingdom.

He started his political career in 2013 when he elected as a member of the National Assembly as an independent candidate from NA-59 Attock. He said to be the youngest parliamentarian at that time to became an MNA at the age of 26 only.