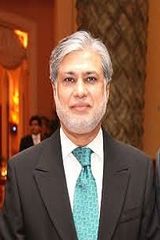 Muhammad Ishaq Dar is a Pakistani politician who is associated with Pakistan Muslim League N. He has served as a Financial Minister of Pakistan. He is now the senator but did not take charge as he is in England under political asylum status. His son Ali Dar is married to Nawaz Sharif’s younger daughter. This article has all the information about Ishaq, including Muhammad Ishaq Dar Biography and Muhammad Ishaq Dar Family. Ishaq Dar has done Chartered Accountancy but he is mostly known as a politician who has been serving for the last 20 years. Based on his expertise in economics, he has mostly remained a member of the negotiation team of IMF. He also has experience as a professional of the World Bank, Asian Development Bank, and the Islamic Development Bank. He has three times served as the Finance Minister of Pakistan. Despite the professional career and the political career, Dar also runs his charitable organizations. He is a philanthropist and runs Hajveri Trust and Hajveri Foundation that serves the poor people and provide them food and shelter.

Muhammad Ishaq was born on 13th May 1950 in Lahore Punjab.

Ishaq Dar is married to Tabbasum Ishaq. His son Ali Dar has married the daughter of Nawaz Sharif.

Dar studied in Government College Lahore and Haily College Haily. At Haily College, he studied Commerce. At university, he was a genius student and got first position in bachelors in Government College Lahore. He was awarded two gold medals and an honorary role. In 1974, he studied Chartered Accountancy in England and Wales where he was a member of the Institute of Chartered accountants. He was the youngest Pakistani to complete the professional qualification in minimum time.

The political career of Dar started in 1980 with the Muslim League N. He was soon appointed as a member of the central committee. Due to his expertise in his profession, he has remained close to Nawaz Sharif. He held his first office in 1992 when Nawaz Sharif was appointed as the Prime Minister for the first time. He was appointed as the Chairman of the Pakistan Board of Investment and Minister of State. The posts lasted for one year because the government was prematurely dismissed by Ghulam Ishaq Khan. His post of the Chairman of Board of investment was in honorary capacity which earned him the presidentship of The Lahore Chamber of Commerce.

His career as a parliamentarian started in 1993 when he was elected as a member of the National Assembly for the first time. He contested on the ticket of PMLN from NA-95 and received 39483 votes. His tenure lasted for three years. Dar was re-elected for the National Assembly in the 1997 general election. He contested from NA-97 and won it by receiving 61556 votes. He was soon inducted into the cabinet of Nawaz Sharif and appointed as Minister of Industries and Investment and then Minister of Commerce.

As a Finance Minister

His first test was seen after a nuclear test when Pakistan was sanctioned heavily. He was soon given the additional portfolio of the Ministry of Finance. He led the negotiation with the IMF to take Pakistan out of the economic crises resulted after the nuclear test. His ministry lasted until the premature end of the government. Due to his allegiance with Nawaz Sharif, he was jailed in a corruption case for two years.

In 2017, he was disqualified by the Supreme Court of Pakistan in the Panama Leaks case and having income beyond his sources. In 2018, he was nominated again for the senate election. His submission of documents was rejected by the Election Commission of Pakistan but later he was permitted by Lahore High Court. He was re-elected but the term ended soon in 2018

In the Panama Case, NAB started an investigation against Dar. He fell ill in Saudi Arab and then left for the United Kingdom for treatment. A non- bailable warrant was issued in 2017 against him for not appearing in court. The Election Commission also suspended his senate membership for not appearing in court. Investigation in further cases also started against him but he did not appear in court and later applied for political asylum in the UK in 2019.