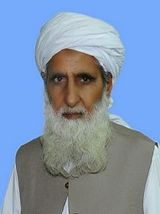 Maulana Muhammad Gohar Shah is a Pakistani politician who is currently a member of the National Assembly of Pakistan, belonging to the Jamiat Ulema-e-Islam (F). He was born on 1 January 1950. Maulana Muhammad Gohar Shah is the Member of National Assembly of Islamic Republic of Pakistan of NA-7(Charsadda-I), He belongs to Hakeem Abdul Haq family, which is one of the powerful as well as the honest family.  [1] profile

On October 20, 2017 ,Election Commission of Pakistan restored membership of five legislators of Khyber Pakhtunkhwa, including two MNAs and three MPAs, after submitting their assets details. They include Federal Minister for Religious Affairs Sardar Muhammad Yousuf, MNA Maulana Gohar Shah and MPAs Abdul Karim, Muhammad Sheraz and Aizaz-ul-Mulk Afkari. Membership of these legislators was suspended after they failed to submit their assets details within stipulated period. [3] restoration