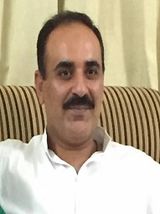 Sardar Muhammad Awais Dreshak hails from Rajanpur is a Pakistani Politician who is functioning as a member of the Provincial Assembly after being elected in September 2018 by-held elections. He is associated with Pakistan Tehreek e Insaf and Imran Khan for bringing the change that everyone is anticipating. He is married and has two children.

He was born in Rajanpur on 18th December 1972. Currently, he is living in the same city from where he likewise contest the elections.

Awais holds the degree of Masters of Science (MSc).

He elected as a member of the Provincial Assembly from the Constituency PP-296 (Rajanpur-IV) in September 2018 by-elections. He contested the elections on the seat of his late brother Sardar Muhammad Tariq Dreshak which fell vacant after his sudden death. The opponents who were also contesting for that seat quit the elections and let (Awais Dreshak) win the seat.