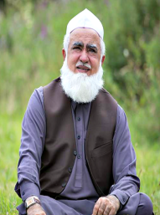 Pir Muhammad Aminul Hasnat Shah is a Pakistani politician.He is the current Minister of State for Religious Affairs and Interfaith Harmony, in office from August 2017.He also served as the Minister of State of Religious Affairs and Inter-faith Harmony from 2013 – 2017 in third Sharif ministry. He has been selected a member of National Assembly of Pakistan (MNA) from NA-64 (Sargodha).he is associated with the Pakistan Muslim League (N). Huzoor Muffakir-ul-Islam, Shaykh Amin-ul-Hasnat Shah Chishti Al-Quraishi was born on 9th May 1950, (25th Rajab 1369 Hijri). The Honourable Shaykh is the son of Huzoor Zia-ul-ummat Shaykh Muhammad Karam Shah Al-Azhari (R.A.). Huzoor Muffakir-ul-Islam is the Sajjada Nasheen of Bhera Sharif, Pakistan. The Honourable Shaykh studied in the holy city of Makkah tul-Mukaramah at the famous, Umm-ul-Qurra University, Makkah, where he obtained his Master Degree in Islamic Law.

The Honourable Shaykh is currently the Chancellor of DMG University Bhera, Pakistan and Kuliya tul-Ghawthiya. The Honourable Shaykh is also the Principal to over 150 smaller educational institutions and is the Patron-in-Chief of the world famous Jamia Al-Karam based in the beautiful and peaceful surroundings of Nottinghamshire in the UK. In the entire network of these Islamic Centres around the world, over 25,000 people are benefiting from the teachings of Islam taught by those who have mastered the sciences at the hands of Huzoor Zia-ul-Ummat and Huzoor Muffakir-ul-Islam, Shaykh Muhammad Amin-ul-Hasnat Shah, Chaishti Al-Quraishi.[1]  Chancellor

Huzoor Muffakir-ul-Islam, Shaykh Muhammad Amin-ul-Hasnat Shah Chishti Al-Quraishi is the Chief Editor of Zia-e-Harem and has organised the translations of the books of Huzoor Zia-ul-Ummat (R.A.), to be done in English. Jamal-ul-Quran has been completed and published in the English Translation and is on sale in many book shops around the world. However the Taffsir, Zia-ul-Quran and Zia-un-Nabi is still in the process of being translated in English from Urdu and will be published very soon. Huzoor Muffakir-ul-Islam, Shaykh Muhammad Amin-ul-Hasnat Shah is a Saint in the Chishti Nizami Sufi Order.

He was elected to National Assembly of Pakistan (MNA) as a candidate of Pakistan Muslim League (N) from Constituency NA-64 ( Sargodha-I) in general election, 2013.[2] Results Pir Sahib got 151690 winning votes while Mr. Nadeem Afzal Gondal, former MNA from this constituency remained runner-up as he bagged only 67212 votes.In June 2013, he was made the minister of state of Religious Affairs and Inter-faith Harmony.[3] Minister of Religious Affairs and Inter-Faith harmony He had ceased to hold ministerial office in July 2017 when the federal cabinet was disbanded following the resignation of Prime Minister Nawaz Sharif after Panama Papers case decision.Following the election of Shahid Khaqan Abbasi as Prime Minister of Pakistan in August 2017, he was inducted into the federal cabinet of Abbasi.He was appointed as the Minister of State for Religious Affairs and Interfaith Harmony.[4] Federal Cabinet

Allah (most high) has bestowed the honourable Pir Amin Ul Hasnat with qualities that attract others towards the beauty of Islam. His appealing and passionate speeches always strike a chord in the hearts of the audience. They are immediately impressed, captivated and spiritually uplifted. He is full of sincerity and relentlessly joins with others in times of difficulty and grief. Hence, we see him helping, providing humanitarian aid and coordinating relief efforts for the needy around the world. He is a very capable administrator and leader. He is very patient and considerate and conceals the errors of others. He respects greatly all those who are from the family of the Prophet (peace and blessings of Allah be upon him). A brave and understanding figure; he is an inspiration to many; young and old alike. He resembles the personality of his noble father in every way. Pir Amin Ul Hasnat is the rightful torchbearer of truth and spirituality. Just by seeing and being in his presence, eyes are cooled, hearts are solaced and souls are comforted. Despair and hopelessness transform into joy and happiness.[5] Appealing and Passionate Speeches