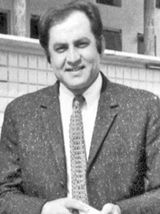 Mohammad Ali was a veteran Pakistani film actor. He was famous as “King of Emotions” because of his powerful performances that engaged the viewers such that one could not resist the flow of emotions while watching his films. He was indeed an asset of Pakistani film industry. He was known as Shahenshah-e-Jazbaat, means The Emperor of Emotions. He had starred in over 250 movies played heroes and villains. He was included among 25 greatest actors of Asia (all time) by CNN survey (On 4 March 2010). Along with Waheed Murad and Nadeem, he remained one of the leading actors of Pakistan film industry.

Mohammad Ali was born into a religious family in Rampur, British India on November 10, 1938. His father, Maulana Syed Murshid Ali was an Islamic scholar. Mohammad Ali was the youngest of two brothers and two sisters. The family moved from Rampur to Rohtak after his birth, and then migrated to Hyderabad and then to Multan soon after the independence of Pakistan.

He passed Matriculation from Millat High School, Mirza Musarat Baig and Syed Nasir Ahmed (Babo sb)had his teachers in Millat High school. He had many friends in Multan( Syed Iqbal Shah , Khalid Mahmood Bukhari EX MPA), Multan in 1954 and moved back to Hyderabad. He continued his study in this city and passed B.A. from City College, Hyderabad. Muhammad Ali joined Radio Pakistan Hyderabad station as a broadcaster in 1956, where his elder brother Irshad was already working as a drama artist. Ali’s initial wage was set Rs. 10 per drama. After a while, he moved to Bhawalpur station and finally moved to Radio Pakistan, Karachi. Zulfiqar Ali Bukhari, director-general Radio Pakistan, became his mentor for acting. Muhammad Ali used to call him his spiritual father. Later, he introduced Ali to his friend, poet and film producer Fazal Ahmed Kareem Fazli, as a hero for his new movie Chiragh jalta raha. But instead of being hero, Ali accepted the role of villain in the movie. Besides Ali, this was also the first film for Zeba, Deeba, Kamal Irani, and the director Fazli. This was the only Pakistani film in which Indian singer Talat Mehmood worked as a singer. Chiragh jalta raha was premiered by Fatima Jinnah on March 9, 1962 at Nishat Cinema, Karachi. He then appeared as villain in director Munawwar Rasheed’s film Bahadur, director Iqbal Yusuf’s film Daal mein kala, and director Javed Hashmi’s film Dil ne tujhay maan liya. His first film as hero was Shararat (1963). Later, he moved to Lahore and worked in Khandan (1964). He got breakthrough from Khamosh raho (1964). In 1989, he starred in Hindi film Clerk. His last movie screened in 1995 titled Dum Mast Qalandar. Mohammad Ali had total 277 films (248 Urdu, 17 Punjabi, 8 Pashto, 2 Double version, 1 Hindi and 1 Bengali). He had 28 films as guest appearance and 1 documentary film. [1] career On the set of Tum mile pyar mila, Mohammad Ali met actress Zeba, and later both married while the film was still under production. The marriage was held on September 29, 1966. The couple reached studio just after the marriage ceremony where they had only one shot before they threw a party. The next day, newspapers published the news of marriage of Mohammad Ali and Zeba. Ali Zeb as the couple came to be popularly known did not have any children together. However Mohammad Ali legally adopted Samina, Zeba’s daughter from a previous marriage, giving her the name Samina Ali. [2] marriage

Mohammad Ali had close relations with different political regimes in the country and carried out number of social works under their patronage. He protested by putting up black dress in International Moscow film festival against India for holding 93000 POW after 1971 war. He also served as Cultural Minister in Nawaz Sharif government and setup new policies for Film Industry. Muhammad Ali and Zeba founded Ali-Zeb Foundation in 1990s to help the terminally ill, especially those suffering from cancer. He made hospitals in Sargodha and Faisalabad with the name of Ali-Zeb foundation. He also continued patronage to the Fatmid Foundation and contributed in several hospitals, besides numerous other NGOs. “The atmosphere in which I was accustomed to work for films and the way films were made have entirely changed, hence I called it quits.” said Muhammad Ali. He was very generous and warm towards his fans. One of the best Pashto poets Zahir Shah Zahir has dedicated all his poetry to Mohammad Ali which includes more than ten books. The poet used to visit his house and have long discussions about the social welfare of people and Pakistani society. [4] quote