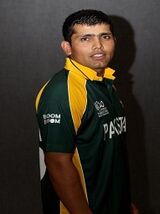 
Kamran Akmal is a wicket keeping top-order batsman of Pakistan who has been part of Pakistan’s team in all three formats for many years. Kamran is recently not part of the national side but has been playing domestic cricket and in T20 leagues. He is working hard to play for Pakistan again. He is one of the most successful wicket-keeper for Pakistan who has performed very well with the bat, and nowadays many people want him to play for Pakistan as a batsman. This article has all the information about Kamran, including Kamran Akmal Biography. Kamran was born on 13 Jan 1982 at Lahore, Punjab. He is still residing there.

He got his matriculation from the central model school, Lahore.

Kamran is the son of Muhammad Akmal, and he belongs to Lahore. His family has a close connection to cricket as his two brothers Adnan Akmal, and Umar Akmal has also played for Pakistan. Babar Azam, who is the top currently Pakistan’s top batsman and captain of limited overs format of the national side, is a cousin of Kamran. Kamran got married in the year 2006, and currently, he lives with his wife and three children at Lahore.

Kamran started playing domestic cricket when he became part of Lahore in the Quaid e Azam trophy 1997-98. He performed well with the gloves and contributed well as a batsman. At that time Pakistan team needed a wicket-keeper who could bat well; he continued his hard work and improved both batting and wicket-keeping in the first-class. After continuously playing for five years, Kamran made his entrance into international cricket.

He has played plenty of domestic cricket. He started playing domestic in the year 1997 and still plays till today in 2020. He has played 246 First-Class games so far, in which he has scored a total of 13369 runs. His first-class average is 38.63, with 33 centuries and 62 fifties to his name. In 378 first-class innings, Kamran has taken 860 catches and 65 stumpings overall.
He has also played a lot of List-A cricket and appeared in 340 List-A matches and has made 9101 runs, averaging 32.38 while Kamran has made 21 hundred and 34 fifties in the format.

Kamran has been playing in different T20 leagues and continues to play. He started playing from the IPL 2008. He remained the part of the Rajasthan Royals team as a wicket-keeper and top-order batsman. He played five matches, including the final, and Kamran’s team won the tournament in the end. He did not play further cricket in IPL. He has also been playing in Pakistan Super League from 2016 and still plays in the league.

He has always played for Peshawar Zalmi in all PSL seasons. He scored a total of 151 runs in the first edition of the PSL. In the 2017 PSL season, he played few fine knocks for Peshawar, including a brilliant Hundred in a match against Karachi Kings, which helped Peshawar qualify for the final. In this season, Akmal declared the highest tournament score with 353 runs and best wicket-keeper with 12 dismissals. He has also played in other seasons of the PSL.

He scored another century when Pakistan toured Bangladesh in the year 2008. Akmal made the vice-captain of Pakistan’s test team in July 2010 but was soon removed due to spot-fixing allegations. He played his last test on 26 Aug 2010 against England. Kamran made back to back ODI hundreds when England’s team toured Pakistan. He was at the peak of his form in those days as he registered seven international centuries in just Six months during 2006. In the year 2008, he hit three consecutive sixes to seal the victory against West Indies.

Exclusion from the team

Kamran was good with both bat and gloves during his early days in international, but after 2009 his keeping skills went down, and he dropped many catches, including some straightforward ones. In the 2010 series against Australia, he lost too many catches, and many proved so costly for Pakistan. He also faced allegations of Spot-fixing in 2010 when Pakistan toured England.
Kamran is an elegant opening batsman, and he has served well as a batsman and as a wicketkeeper for many years.