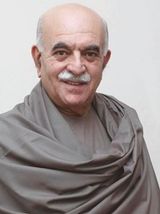 Mahmood Khan Achakzai is a pakistani politician. He is the leader and the chairman of the Pakhtunkhwa Milli Awami Party,a pusthon nationalist party based in the Baluchistan region of Pakistan. The son of activist Abdul Samad Khan Achakzai, Achakzai remained a member of the National Assembly of Pakistan three times from his hometown of Qilla Abdullah and Quetta. He received BSc degree in Engineering from University of Engineering and Technology, Peshawar in 1971. [1] biography After his father was assassinated in a bomb attack in Quetta in December 1973 he was elected as the chairman and took control of the reins of the party. Achakzai was elected a Member of National Assembly for the first time in the 1993 elections from Quetta’s NA-198 constituency with the backing of the then Pakistan Muslim League. [2] Career and  news Though was not a member of the 2008-2013 parliament, Mahmood Khan has been in the news for his political role, especially over national issues like his meetings with Nawaz Sharif over the NFC award and the Balochistan issue, his participation in  All Party Conference (APC) hosted by the Jamiat-i-Ulema-i-Islam Fazal (JUI-F) supporting talks with militants through a jirga. Off lately Achakzai’s name had been generating buzz among political circles as he was considered a leading candidate for the post of caretaker prime minister, but the scenario was ruled out with the appointment of Mir Hazar Khoso as the caretaker prime minister. Achakzai’s earlier refusal to hold the caretaker post had also corraborated the views of some that he and his party intended to contest the upcoming elections 2018  (Which is now confirmed). The nomination papers of Mahmood Khan Achakzai for the upcoming elections were conditionally accepted by Election Commission of Pakistan subject to verification of particulars by the Higher Education Commssion, Federal Board of Revenue and State Bank of Pakistan. The ECP also issued on its website the details of Achakzai’s records provided by NAB, SBP and FBR. The PML-N has once again decided to support Achakzai, and has announced that they will support him on the NA-259 seat. A former presidential candidate Waheed Kamal had filed a petition in the election commission seeking disqualification of Mehmood Khan Achakzai over his statement. The petition said that Achakzai’s speech on the floor of the National Assembly was a bid to malign the armed forces, which is against Article 19 of the constitution. The petitioner seeks disqualification of Mehmood Khan Achakzai over his statement, “which bring disrepute to the security forces”. A bench of the ECP headed by the Chief Election Commissioner while hearing the case directed the PkMAP leader to appear on September 1st to explain his position. The commission adjourned the hearing till August 17,2016. Some people have termed Achakzai’s outburst as unpatriotic and some have even termed his comments as being based on treason. Bold statements like the one made by Achakzai, charge sheeting the security agencies of Pakistan is fraught with peril. However, one has to be objective.

Meeting with Israili and Indian PMs Mehmood Khan Achakai once again bestuck in a controversy when his meetings with Indian prime minister Nirinda Moodi and Israeili prime minister Binyamin Neetan Yahu on 21st of January,2018 in New Delhi were exposed by Pakistani media. The purpose behind these secret meetings has not been known yet. [4] meetings