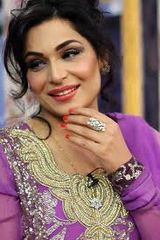 Meera Khan who is known as Meera jee in the Showbiz is a versatile Pakistani actress and philanthropist. She has played numerous characters with perfection and persistence that also earned her Pride of Performance Award by the Government of Pakistan. Her real name is Irtiza Rubab. This article has all the information about Meera, including Meera Khan Biography and Meera Khan Movies. Meera is a bold, fearless and amazing Pakistani actress, model, producer, and philanthropist. She is referred to as a controversy queen who always stays in the limelight sometimes for her statement and sometimes for her personal life. Meera is the stage name that is given to her by the industry and since then she is known as Meera Ji. Despite so many years in the industry, she is still one of the versatile actresses who can’t be ignored whenever comes to the screen. She has done unlimited Lollywood films and a few Bollywood films in her career.

Meera was born as Irtiza Rubab on 12th May 1977 in Sheikhupura. Afterward, her family moved to Lahore. In 2018 she revealed to settle in the US forever with her husband.

Meera holds the degree of graduate from Kinnard College. During her educational period, she actively took part in various plays that enhanced interest in acting in her.

Meera started her acting career by appearing in a Lollywood film ‘Kanta’ in 1995. However, the film that gave her a huge recognition is ‘Khilona’ that proved to be a turning point in Meera’s career. Later Meera appeared in numerous films with amazing Pakistani actors. She remained a part of several Punjabi and Urdu Films. In 2007 she appeared in an Urdu thriller film ‘Godfather’ opposite Vinod Khanna, Mikaal Zulfiqar, and Arbaaz Khan. In 2019 Meera beautifully portrayed a character of Shameera in the film ‘Baaji’ that collected more than 11 crores at the box office. She is currently working in various other films.

Meera is one of those Pakistani actresses who has worked in Bollywood too. She gave her Bollywood debut in 2005 in the film ‘Nazar’ opposite Ashmit Patel. The film was the first Indo-Pakistani joint movie venture in 50 years. Later she appeared in another Bollywood film ‘Kasak’ opposite Mukesh Tiwari. In 2015 she was seen in another idem number of Indian film ‘Bumper Draw.’