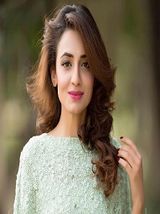 
Marjan Fatima is a stunning Pakistani model and an actress who is the part of the Showbiz industry since 2014 and has achieved great success on her own terms. She owns her own fashion blog with the name ‘Marjan Fatima Bokhari’s Fashion blog’.This article contains information about her including Marjan Fatima Biography and Marjan Fatima Dramas. Marjan Fatima Bokhari is a wonderful Pakistani actress, a stunning Model, an impressive blogger and above all she is a famous fashionista. She made her screen debut in 2014 when she became part of a show ‘VJ Hunt’ as a contestant and soon succeeded to capture the attention of people with her sensational performance one after another. She has made millions of followers over all these years with her beauty and talent without having any artistic background. She owns her own fashion blog with the name ‘Marjan Fatima Bokhari’s Fashion blog’.

She was born on 22nd April 1987 in Karachi where she grew up. Later she moved to London from where she completed her education. Currently, she resides in Islamabad with her family yet often visits Karachi for her work.

She did her schooling from Karachi after that she moved to London from where she completed her bachelor’s from The University of Bedfordshire, England. On returning back she stepped into the Showbiz industry.

She came into the spotlight in 2014 when she partook in the ‘VJ Hunt’ challenge of ARY Musik. Marjan has done numerous photoshoots as a model for creator brands. She has likewise strolled on the inclines of numerous local fashion shows. She sparkles like a star in each photoshoot of hers, be it a wedding shoot, western wear or simply easygoing desi. Her style sense is dependably on point and she never neglects to inspire us. She has likewise worked in TV advertisements as well.