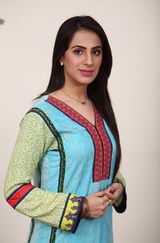 
Maham Amir is a beautiful and a well known Pakistani actress and a model and a wife of another prominent Pakistani actor and a Host Faizan Sheikh and daughter in Law of Parveen Akbar. This article covers all the detailed information about her including Maham Amir biography, Maham Amir family and Maham Amir dramas. Did you know that she is a cousin of Hira Tareen and Zara Tareen? Maham is a Young, energetic and accomplished Pakistani actress who also did theatre in the start. She has that charismatic personality which makes her a supermodel. She took a start with supporting characters but today she cast as a lead role in dramas which is a validation of her hard work. She had the dream of becoming an actress one day since childhood which she has fulfilled and today she is one of the prominent names in the Pakistani industry.

She was born on 26th December 1990 in Karachi and currently, she resides in the same city with her family.

She got married to Faizan Sheikh who is a well-known co-host of Faysal Qureshi and Adeel Amjad (known as Adi) in Salam Zindagi and also an actor. The couple tied the knot in August 2018 in a star-studded event. Maham Amir’s sister (cousin) Zara Tareen and Hira Tareen are also a part of Showbiz and a very prominent Pakistani actor and model. Maham’s mother in Law Parveen Akbar is a legendary Pakistani actress who is in the industry for a long time.

She has acted in many hit TV serials and has worked with various TV channels. She has played flexible characters on-screen however generally she is found in positive roles. She has imparted the screen to many best TV stars including Fahad Mustafa, Hareem Farooq, Muneeb Butt, Sami Khan, and many others. Some top-rated TV serials in which Maham has worked are ‘Ek Hi Bhool’ and ‘Tum Miley’ of ARY Digital, ‘Rishton Ki Dor’, ‘Roshni’ and ‘Babul Ka Angna’ of Geo TV and some more. She has dealt with screens both as a main just as a supporting performer.

She has worked with pretty much every style architect of Pakistan and has demonstrated her appeal on incalculable slopes. She has done numerous photoshoots for creator brands and she has been a piece of numerous popular style weeks as well. She has also walked on the ramp for different designers.