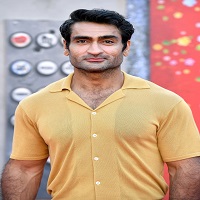 Kumail Nanjiani is a successful Pakistani-American comedian, screenwriter, actor, and podcaster. Nowadays, he is known for his outstanding role as Dinesh in the Silicon Valley comedy series of HBO. People also know him as the man who is a co-writer for The Big Sick and has starred in this romantic comedy series.

Nanjiani was put forward for the Academy Award for Best Original Screenplay for co-writing the film. Moreover, he was mentioned as the 100th most influential person in the world by The Time magazine in the year 2018.

Nanjiani was the voice actor that played the voice for the character Prismo in the animated series ‘Adventure Time.’ Also, he had a recurring role of Amir Larussa on Newsreader as well. He is famous and successful due to his hard work and consistency.

Kumail Nanjiani was born in Karachi, Pakistan. Originally a follower of Islam, Nanjiani later grew to be an atheist.

Apart from that, he married Emily, who is also a producer, author, and a family therapist at Chicago City Hall. Currently, Nanjiani is an Atheist and an avid video gamer.

After his graduation, Nanjiani, with the help of Ali Baker hosted a theme for a podcast. The theme of this podcast was based on a video game. Unfortunately, due to some reasons, Ali Baker took his leave from the show, and Nanjiani’s wife, Emily, accompanied him for the hosting. Before other commitments, he regularly appeared on Harmon town, which was a podcast owned by Dan Harmon.

The role of Nanjiani in this podcast was to portray a character named Chris de Burgh to play D&D with Harmon.

In 2013, there was a film known as The Kings of Summer; Nanjiani played the character of a transporter in this film. In addition to that, the comedian also took part in multiple TV series, due to which he made an appearance in a TNT series as a side character. In the series, he was a character diagnosed with a disproportionate fear of crowded spaces.

Nanjiani was also a guest star on the series Veep by HBO. In Veep, he starred as an accountant.

A special of Kumail Nanjiani was released in July 2013 titled Beta Male. By the end of 2013, Nanjiani and Jonah Ray hosted another show. The show featured various comedians which aired in 2014.

Nanjiani played the role of Dinesh in Silicon Valley, which was an HBO sitcom in April 2014. Consequently, Nanjiani even voice acted a famous character in a zombie apocalypse game. During the year 2014, Nanjiani thought of hosting a weekly podcast to talk about and remember a drama series.

Each episode of the X-Files features Nanjiani and other writers, producers, directors, and actors of ‘The X-Files.’

A year later, Nanjiani became a guest star in an American Sitcom. The comedian had provided his voice for Mshak Moradi, a character from a publicity advertisement. The drama was a part of the publicity advisement held for a military science fiction video game.

From reading the article, readers have already received an idea about Nanjiani and the number of roles he has performed over the course of his long career. Furthermore, we have also seen Nanjiani appear as different characters and provide their voices along with being featured as a guest star for other dramas, sitcoms, and shows.

The Big Sick was a romantic comedy in 2017, and it was written by Nanjiani and his wife, Emily. It was about the relationship the two had with each other. The comedian had also starred in “The Bick Sick” romantic comedy. Also, it became one of the best movies to be approved off in 2017.

Furthermore, the romantic comedy “The Big Sick” was also chosen as one of the top ten films of 2017 by the American Film Institute. Furthermore, it was also nominated for the Academy Award for Best Original Screenplay. With more than 40 million US dollars gross income, the film became the third highest-grossing independent film.

Even now, Nanjiani is playing various roles of different characters, such as voicing the alien Pawny in Men in Black International. He is also starring in the action-comedy film Stuber that was released in 2020, July 12th.

During the Covid-19 Pandemic, Nanjiani, along with his wife Emily, had launched a podcast, ‘Staying in with Emily and Kumail.’ The series focuses on the forced conditions of isolation that the couple has to experience during the global pandemic. Even so, the podcast has become widely acclaimed in the media as well.

He starred in another comedy-chase film called ‘The Lovebirds’ alongside Issa Rae in May 2020. The comedy-chase movie is available on Netflix and produced by Paramount Pictures.

Eternals is one of the episodes of a film for the Marvel Cinematic Universe, and Nanjiani is starred as the character Kingo. The episode was released in 2021, on November 5th.

Here is a list of some of the films that Kumail Nanjiani has starred in;

The net worth of Kumail Nanjiani is 8 million US dollars.

Over the course of his adulthood, Kumail Nanjiani has strived for excellence and success. He has created various opportunities for himself to hone his skills as both an actor and a screenwriter. He has kept himself open to future roles and opportunities, and that is why he has starred in many successful films that have provided him with awards and nominations for his efforts. Moreover, his sheer will, hard work, and consistency has made him what he is today.

His social media accounts include: