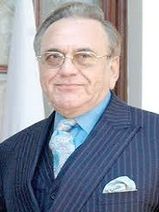 Khurshid Mahmud Kasuri (Born 18 June 1941), is a Pakistani senior foreign service statesman, politician, and diplomat who as the Minister of Foreign Affairs from November 2002 until November 2007.Khurshid Kasuri comes from a traditional political family of Punjab Province that has been active in politics since the times of British India.The Pakistan government sent Mian Khurshid Mahmud Kasuri on official assignments to UK and U.S.A. in 1972 to represent Pakistan ‘s point of view.He was elected to the National Assembly in 2002 elections and served as the foreign minister of the country from 2002 to 2007.Kasuri joined PTI under the leadership of Imran Khan. Khurshid Mahmud Kasuri is a Pakistani senior foreign service statesman, politician, and diplomat who as the Minister of Foreign Affairs from November 2002 until November 2007.  Hailing from a political family, Kasuri joined the Foreign service in the 1960s, and played a crucial role in the foreign politics of East-Pakistan in the 1970s where he became noted for his diplomatic skills, although he became aware of atrocities committed by Pakistan’s authorities. In the 1970s–80s, Kasuri also served in the Foreign ministry as a director of the Soviet Union and Eastern Europe Affairs. His political activism started in the 1980s through the MRD alliance led by Benazir Bhutto, while continuing his foreign service assignments in the USSR. He was brought into international arena and political fame by Shaukat Aziz in 2004, and was a noted for his diplomatic skills to serve for his country. In foreign politics, he helped normalise relations with Israel, Russia, India, and the European Union, and putting forward the neutral policies towards other countries. He unsuccessfully contested in a 2008 general elections and subsequently developed serious disagreements with his party’s leadership, leading the events to join him the PTI in 2011.  Apart from his statesmanship, he had tenured as a professor at the University of Paris and University of Nice in France, and in 2008, he assumed the professorship as a professor of political science as well as the executive directorship of the Beaconhouse National University (BNU). He is a senior member of Pakistan Tehreek-e-Insaf and its candidate for National Assembly form Kasur.[1] Profile –  Profile

Khurshid Kasuri obtained BA (Hons) degree from the Punjab University in 1961. After completing his education at home, he did his tripos degree from Cambridge University and qualified as Barrister-at-Law at Gray’s Inn London. After Cambridge, he was admitted to Oxford University for postgraduate work in public administration & political science. He took French civilisation courses at the Sorbonne University in Paris and the University of Nice in France.[2] Education –  Education His grandfather Maulana Abdul Qadir Kasuri was a leader of the Indian National Congress and his father Mahmud Ali Kasuri was also in the Congress (until 1940). His father was also a member of the federal cabinet. He was one of the few politicians in the country who quit a high office on the basis of principles. Mian Mahmud Ali Kasuri had also contributed towards the framing of the original 1973 Constitution. Khurshid Kasuri comes from a traditional political family of Punjab Province that has been active in politics since the times of British India. His grandfather, Abdul Qadir Kasuri, was a religious figure and was also a provisional leader of the Congress Party. His father Mahmud Ali Kasuri, also continued his ties with Congress Party until 1940 when his father was subsequently sentenced to four months in imprisonment. Mahmud Kasuri later joined the socialist party and went on to serve in the government of Zulfikar Ali Bhutto. His father was one of the few politicians in the country to give up high office on a point of principle when he resigned as Minister for Law and Parliamentary Affairs and Deputy Leader of the National Assembly due to differences on political and constitutional matters with Zulfikar Ali Bhutto. Mian Mahmud Ali Kasuri’s contribution towards the framing of the original 1973 Constitution is widely acknowledged. [3] Political Background –  Political Background Immediately on his return from abroad after completing his higher education, he started his political career by taking an active part in the political movement launched by the combined opposition parties during the days of Field Marshal Muhammad Ayub Khan for the restoration of democracy.

The Pakistan government sent Mian Khurshid Mahmud Kasuri on official assignments to UK and U.S.A. in 1972 to represent Pakistan ‘s point of view on issues of concern to Pakistan following the Bangladesh tragedy.

After the formation of the People’s Democratic Alliance (PDA) prior to the 1990 elections, he was unanimously elected as the first secretary general of the PDA, which was the main opposition alliance in the country at that time. He was appointed federal minister for parliamentary affairs in the interim government. Immediately on his return from abroad, Kasuri joined the Foreign Service, and took up the first diplomatic assignment in East-Pakistan. There, he completed an assessment report on events on leading up the civil disobedience in contingent. In 1971, he was subsequently sent to United Kingdom, Soviet Union, and United States to on official assignments to work on a framework to find out peaceful solution for the East Pakistan crises. In 1972, Kasuri was called by the Pakistan Government to join the diplomatic delegation of Pakistan to United Nations. After 1972, Kasuri joined the Ministry of Foreign Affairs where he served as deputy director of the directorate-general for the Soviet and East European Affairs. He played extremely vital role to alleviate the USSR-Pakistan relations. He assisted Bhutto to acquire the steel mills from the Soviet Union, and technical assistance to complete the industrial programmes in the country. In 1974, he accompanied Bhutto to meet with Alexei Kosygin in Moscow, where he helped develop closer economic relations between two countries.[4] Foreign Diplomacy –  Foreign Diplomacy In 1990, he again joined the foreign ministry, and guided Pakistan Muslim League on foreign policies issues. In 1996, he presided the party delegation and visited People’s Republic of China (PRC). This delegation was invited by the Communist Party of China (CPC) and was received by the top leadership of the CPC. He has also attended the Inter-Parliamentary Union conferences held in Seoul and in Cairo in 1997 as a chairman of the Pakistan Parliamentary Delegations. In 1998, he publicly endorsed for Prime minister Navaz Sharif’s decision for atomic tests (See: Chagai-I and Chagai-II) and was appointed as Prime Minister’s Special Envoy (PMSE) to present his country’s point of view, while backing the rationale of country’s nuclear response. He subsequently visited many countries to gather the support for country’s nuclear testing programme, including Russia, United States, Canada, China, France, United Kingdom, and other important countries in the world. [5] In 1990 –  In 1990