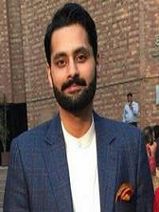 
Jibran Nasir is a passionate and energetic Pakistani Civil rights activist who is also struggling to hold a position in Politics. He is famous for his protests against terrorism in the country. Jibran is engaged to Pakistani actress and model Mansha Pasha. This article has all the information about Jibran, including Jibran Nasir Biography and Jibran Nasir Family. Mohammad Jibran is a young and enthusiastic Pakistani Civil Rights activist and a politician. He is likewise a lawyer who protects the rights of a common man. Jibran came into the light after the 2014 APS school attack, where he demanded the arrest of Lal Masjid cleric Abdul Aziz. After his bold step, he received threats that didn’t bother him. Though he is very passionate about his Political career yet remained unsuccessful in Politics.

He was born on 10th February 1987 in Karachi. Currently, Jibran residing in the same city with his family.

After completing his A’Levels from The Lyceum School, Karachi he went abroad for higher studies. He went to the University of London from where he obtained his degree of  Bachelor of Law (LLB). Later he completed LLM from the University of Northumbria.