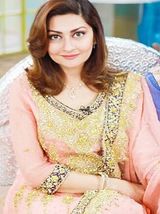 
Jana Malik is a talented Pakistani actress, a stunning Model and an amazing Chef who is struggling in the Showbiz for a long time. She got married to a Pakistani singer and a music director Nauman Javaid but got divorced after 6 months. This article contains a blend of information about her including Jana Malik Biography, Jana Malik Family and Jana Malik Dramas. Jana is one of the most stunning actresses of our Industry who started her career when she was hardly13 years old. She has made millions of followers over all these years with her beauty and talent without having any artistic background. She is known for her supporting roles in various serials. Other than an actress she is a Chef too who bakes Appetizing and dainty cakes. Moreover she has done a diploma in Hair color and Hairstyle from Tony and Guy.

She was born on 26th April 1984 in Lahore where she spent all her life. Currently, she resides in the same city with her family.

She was born to a Pashtun, Kakazai tribe from a Kashmiri origin. She got married to Nauman Javaid in 2016 in a family event (A singer, music director and a composer who is known for directing the music of a popular Indian movie Yamla pagla Deewana) but unfortunately, the marriage didn’t last for long and both parted their ways after 6 months relationship. Currently, she is single and has no plans for marriage yet.