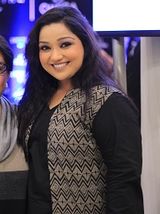 Uroosa Siddiqui is a talented Pakistani actress and a model who has acted in a number of serials and mark her name in the industry without having any artistic background. She got married to Saqib Malik in 2015. This article contains all the information about her including Uroosa Siddiqui Biography and Uroosa Siddiqui Dramas. Uroosa is an adaptable Pakistani actress and model who is being recognized for her comic roles in numerous Pakistani serials. She had been body-shamed several times after being a part of the Showbiz industry but her credence and faith didn’t let her feel down and soon she won the hearts of people with her unconvincing talent. She got married to Saqib Malik (a non-artistic person) in a family event for which she had to lose 20 kgs which weren’t easy for her. She is a strong independent woman who is vigorous, compatible and accomplished.

She was born on 1st June 1984 in Karachi where she spent all her life. Currently, she resides in the same city with her family.

She holds the degree of Bachelors which she attained from the National Academy of Performing Arts (NAPA), Karachi.