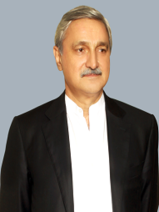 
Jahangir Tareen is a senior politician in Pakistan. He has been three times elected as a member of the National Assembly of Pakistan. Tareen has played a vital role in the making of the current government of PTI in federal and Punjab. Apart from politics, he has been a successful businessman in Pakistan. He has major shares in the Sugar industry, Milk production, Farming, and food industry. He is one of the wealthiest men in Pakistan. This article has all the information about Jahangir, including Jahangir Tareen Biography. Jahangir was born on 4th July 1953 in Chittagong, Bangladesh. At that time, it was called East-Pakistan. Currently, he is the resident of Lodhran.

Jahangir studied his early education in Karachi. He graduated from Forman Christian College Lahore in 1971. After his graduation, he went to the USA to pursue a Masters Degree. Tareen did his MBA from the University of Carolina USA. His Master’s Degree in Business has contributed much to his vast business. After completion of his education, he was appointed as a lecturer in the Department of Public Administration, University of Punjab. He also worked at Grindlays Bank for a short time.

Jahangir is the son of Allah Nawaz Tareen. He married Amina Tareen and is blessed with 4 children; three daughters and a son. His elder daughter Sehar Tareen is a notable Pakistani Fashion designer while his younger daughter is a Publishing Editor at Paparazzi Magazine. His only Son Ali Tareen has achieved his degree from Oxford University. Currently, he runs a cricket franchise, Multan Sultan, and an NGO. His sister Seemi Ezdi is also a politician and has received a ticket for senate from PTI. One of his cousins, Haroon Akhtar, likewise belongs to the same field.

The political career of Tareen started with PMLQ when he was elected from NA-195 on the ticket of PMLQ in 2002.  Having enormous agricultural experience, he was appointed as an advisor on agriculture and social sector initiatives to the Chief Minister of Punjab, Pervez Ilahi. In 2004, he was included in the cabinet of Shoukat Aziz as a minister of Industry and production and worked as a minister from 2004 to 2007. Due to his expertise, economic statistics increased rapidly.

In 2008, he contested election from the seat of PMLF at NA-195 and won it.  After a few years, when he made a forward block in the party, he resigned from his seat and joined PTI.  As the popularity of PTI was rising, so did Jahangir Tareen. He was made the Secretary-General of the Party in 2013 based on his experience and pure career. This was the time when Tareen re-emerged as a new leader. As an industrialist and one of the wealthiest men of the country, he is said to be the one financing PTI for its anti-government movements and rallies that mobilizes the youth against the status quo and for a change in the political life of the country. Despite his investment in Lodhran in business as well as in the social sector, he lost the 2013 election from NA-154 miserably. It was the first-ever major blow to his political career. He came back victorious in the same constituency in the by-elections in 2015 after the election in NA-95 was considered as irregular and mismanaged.

The second blow to his vibrant political career was faced in December 2017 when he was disqualified by Supreme Court for not declaring an offshore company in his assets. This time, he had to lose his seat that he won after a severe defeat. He also had to step down as secretary-general of PTI. After having no chance of holding a public chair, Tareen’s importance never deteriorated on the national level. After supporting PTI’s campaign for elections 2018, he was the one who would take his jet and gather independent candidates to make sure the formation of the government of Imran Khan. For one and a half years, he remained the right hand of Imran Khan despite not having any public office. Recently, news erupted of accusing Tareen, a part of the Sugar scandal that benefited Tareen along with other government officials.

Tareen as a Social worker

He is also a social worker and runs Tareen Education Foundation. So far, it has spent 300 million rupees in the last 6 years for up-gradation of existing government schools. Along with this, he has founded Punjab Vocational Training Council that develops the skills of the people for their financial independence