By muzammalarshadDecember 20, 2017No Comments4 Mins Read 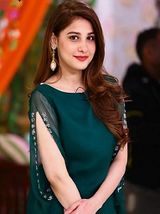 
Hina Altaf is a competent Pakistani actress, Host, and a model who is the part of Showbiz industry since 2015 without having any artistic background. She had been a part of wonderful Pakistani serials and has worked with accomplished Pakistani actors. Hina has previously worked as a Vj. This article is a blend of information about her, including Hina Altaf Biography and Hina Altaf Dramas. Hina Altaf Khan is a beautiful and talented Pakistani actress and a model who is a part of this industry for a long time. She has made millions of followers over all these years with her beauty and talent. Hina proved herself with her amazing performances one after another, which wasn’t a surprise for her fans who welcomed her warmly since her first day in the industry when Hina didn’t have any experience of acting. Other than an amazing actress, she is a remarkable host too.

She was born on 24th October 1992 in Karachi where she spent all her life. Currently, she resides in the same city all alone.

Hina did her Schooling from the Beacon house School, Karachi. Later she went to Iqra University to attain her bachelor’s degree.

She owns a very complicated relationship with her family. Her father died at a very young age, after which her mother took care of their children. Due to the Psychological illness of her mother, she (Hina) generated many issues with her, after which she left the house and became an independent woman. During the process, she went into the depression, for which Dr. Alam helped her to recover from the depression. She shares a strong relationship with him and considers him as her own father.

In 2019 she announced hosting the show ‘The Pepsi battle of the bands’ along with an actor Ali Safina. On being asked about her hosting decision, she said that hosting is her passion, which can never become dull. She has also made her own Youtube channel, where she posts videos of her daily routine.