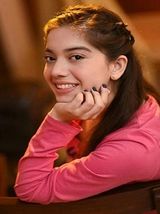 Arisha Razi is a popular television and film actress who is likewise a successful television commercial model. Arisha is known for performing as a child artist in a popular comedy show ‘Hum Sab Umeed Sai Hain.’ She is a younger sister of another Pakistani actress Sarah Razi. This article has all the information about Arisha, including Arisha Razi Biography and Arisha Razi Dramas. Arisha is a youngest Pakistani television and film actress who started working in the Showbiz as a Child star. She has likewise served as a Host and achieved a massive admiration at a very young age. Arisha is working in several serials and films and enhancing her acting skills with her every project. Surprisingly she did her first commercial at the age of 1 and afterwards, she became unstoppable. Arisha is known for doing supporting characters.

She was born on 3rd April 2002 in Karachi. Currently, Arisha is living in the same city with her family.

Arisha did her schooling from Dawood Public School, Karachi.

Arisha was born in an ordinary and non-artistic family. After Arisha’s entry in Showbiz, her elder sister Sarah Razi also came forward and joined the industry. Sarah is another notable Pakistani television and film actress. Razi is currently unmarried.

Arisha made her entry in the Showbiz when she was 1 year old. She did a lot of branded commercial arts. With time she started getting more and more offers from everywhere because of her rising popularity. With the comedy show ‘Hum Sab Umeed Se Hain’ she gained immense acknowledgement where she performed as a child artist. Arisha remained a part of many commercial ads and did many shoots for different designers.

In 2010 Arisha made her entry on the same screen by appearing in the drama serial ‘Main Abdul Qadir Hoon’ as a child start opposite Fahad Mustafa, Alishba Yousaf and Aamina Sheikh. She was blessed with good acting skills that gave her more and more opportunities. In 2014 her role in drama serial ‘Malika-e-Aaliya’ made her more prominent and she became the most loved child artist of the Showbiz industry. Afterwards, she showed in many dramas and currently doing various projects.

In 2016 she gave her voice to one of the characters of ‘3 Bahadur: The Revenge of Baba Balaam.’ In 2018 she was again approached for the voice of Amna in the animated film ‘3 Bahadur: Rise of the Warriors.’ In 2019 she was seen in another Lollywood film ‘Saach’ opposite her sister Sarah Razi.