By tauseefanwarNovember 15, 2017No Comments3 Mins Read 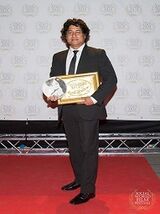 
Farhan Alam is a widely acclaimed Pakistani cinematographer who has been a part of showbiz for fifteen years. He is recognized for his cinematographic projects such as Mera Naseeb, Malal, Coke Kahaani, and Sanjah. He draws inspiration from his father, who likewise served in this field. He has bagged various awards for his contribution to the entertainment industry. This article has all the information about him, including Farhan Alam Biography. Farhan is a Pakistani Director and Cinematographer who believes in taking chances and risks and has learned to carry the tough with the ease. He never fears to make mistakes and to seek advice from experienced people when in need. He believes that regardless of one’s experience, one should be unbiased to new and creative ideas. He considers filmmaking as a collaborative effort, in which everyone has to play his role. He grew up seeing his father as an eminent and recognized photography director and so followed his footsteps and raised to heights of fame quickly.

His fondness for celluloid directed him to do a diploma in Television and film production at the L.A. (Los Angeles) City College, USA.

He is the son of an acclaimed cinematographer and pioneer of T.V. and film industry Shah Alam.

His love for motion pictures and cinematography started at a very young age. He started observing his father, Shah Alam, a renowned cinematographer and founder of the T.V. and movie industry in Pakistan. After completing a diploma in T.V. and film production, he started his professional career as a sound engineer, grip, gaffer, production assistant, and assistant cameraman.

He collaborated with Momina Duraid for the Hum T.V. drama Dastan, which turned out to be a blockbuster. He got nominated in the category of best cinematographer for this drama in 2010. His short movie ‘Calendar’ received immense appreciation at N.Y. Film Expo 2010.

He heard the story of a disabled girl from Baluchistan’s village who moved to the city without anyone’s help searching for her parents. This subject appeared essential to him to be shown to the world.