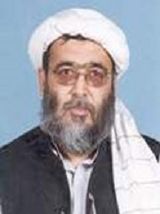 Mr. Hafiz Hussain Sharodi s/o Moulana Mohammad Yaqoob Sharodi  completed his religious degrees from Wafaqul Madaris. Professionally he is Religious Scholar and elected as MPA from PB-3 Quetta-III in general election 2002 in affiliation with MMA. He delivered his services as Minister for Local Government & Rural Development Balochistan. He has resigned on October 2, 2007 in response to the decision of APDM. Hafiz Hussain Ahmed was born in 1951 in Quetta. He has been elected as MNA for his second term as an MMAP Candidate. He is politically affiliated with JUI(F). Earlier, he was elected as MNA for the term of 1988 and served as Deputy Parliamentary Leader of JUI in the National Assembly. Hafiz Hussain Ahmed is a Hafiz-e-Quran and also received a Dars-e-Nizami degree in 1977. His professional occupation is Tadrees (Teaching). He is currently serving as Deputy Parliamentary Leader of MMAP in the National Assembly. Married with four sons and four daughters, his hobbies include reading. He elected as member of National Assembly in 2002 elections from NA-260 , Quetta-cum-Chagai-cum-Mastung. [1] Biography Biography

Jamiat Ulema-e-Islam-Fazl (JUI-F) Information Secretary Hafiz Hussain Ahmad has said the move to replace PML-N chief minister of Balochistan with PML-Q leader will soon send shockwaves throughout the country.
“In the past, the PML-N government was replaced by the PML-Q government. Now too, the PML-N chief minister has been replaced by a PML-Q leader in Balochistan,” said Ahmad while talking to media-persons. He said a lot of rumours were doing the rounds regarding Senate elections not being held on time. “Its impact will create problems for some persons and political parties,” he added. Ahmed said that apparently there was no room for a technocrat government in the Constitution, but room could be provided. [2] CM Balochistan replacement to create problems

Jamiat Ulema-e-Islam Fazl (JUI-F) central leader Hafiz Hussain Ahmed said that the speaker national assembly was bidding regulations of the parliament and Pakistan Tehreek-e-Insaf (PTI) lawmakers could not be allowed in the parliament till next election. While addressing press conference in Multan, JUI-F leader demanded for trial of Benazir Bhutto murder case, Model Town incident and Nine Zero cases in the military courts.
He said that weaponry was recovered from the possession of terrorists but not inside the Madrasahs. He added that indiscriminate action must be taken to get rid of terrorism. Hafiz Hussain Ahmed alleged that 21st constitutional amendment handed over full authorities from Sharif to Sharif. He claimed JUI-F was the only political party that opposed the amendment. He said that US victimised Yemen to generate new map of the Middle East. [3] Criticises Speaker NA