By finethoughtsJanuary 23, 2017No Comments5 Mins Read 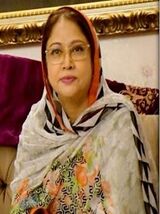 Talpur has been elected as a member of the National Assembly two times. She has also served twice as a Mayor of Nawab shah. After the assassination of Benazir Bhutto, she was the guardian of Bilawal, Asifa and Bakhtawar. She also looked after their property in Larkana. The supporters of the party might miss her from the screen but she has an important role in the party. Faryal is the president of the women wing of Pakistan people’s Party. Along with her brother Asif Ali Zardari, she is facing a case of money laundering in the NAB

She is born on 26th April, 1958 in Larkana. Currently, Talpur is the resident of same city.

She is said to have a Master’s degree but the news was reported that her degree was fake. It turned out only speculations. The party called it a media trial and requested to stop it.