By ahtshamJanuary 7, 2017No Comments5 Mins Read 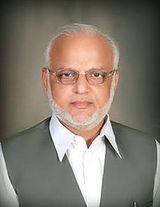 
Ejaz Ahmed Chaudhary is one of the senior politicians and President of Pakistan Tahreek Insaf. He is considered the one who made PTI one of the vibrant political parties in Punjab. He has also served spokesperson of the religious affairs. Ejaz was the one who organized the Insaf Student Federation in the universities that helped to spread the message of the party. This article has all the information about Ejaz, including Ejaz Ahmed Chaudhary Biography. Ejaz has spent 35 years as a political activist with Jumaat Islami. He strongly opposed the military takeover of Zia Ul Haq and organized protests in Lahore that led him to face oppression and torture. In 2007, Imran khan invited him to join PTI, which he responded positively. PTI has primarily benefitted from his experience. Apart from his political activities, he is also a social activist. When he was affiliated with Jumaat Islami, he was appointed the head of Majlis-e-Islami Khidmat. It was a charity organization that assisted poor people. He has served as Chief Political Adviser to Imran khan. Currently, he is the President of PTI Punjab.

He was born on 15th September 1956 in Lahore, Punjab. Currently, Chaudhry is residing in the same city.

Ejaz is the son-in-law of Mian Tufail, who was one of the founding members of Jumaat Islami. He married his daughter Salma Ejaz in 1984.

He got his early education in boarding school in Kohat. He completed his matriculation and intermediate from Cadet Collage Kohat. For graduation, he enrolled in the University of Engineering and Technology Lahore and completed BSc in civil engineering.

It was co-founded by Ejaz. The organization works for the empowerment of farmers and assisting them in the field of agriculture

Ejaz Chaudhry also has an interest in social activities. While a member of Jamaat Islami, he was the head of Majlis Khidmath-e-Islami which was a charity organization. It assisted the people affected by natural disasters. He also demanded the improvement of the Pakistani jails that are in a miserable condition