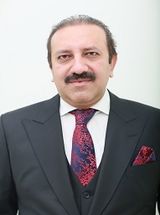 Chaudhry Shehbaz Babar also known as Chaudhry Muhammad Shehbaz Babar Gujjar is a Pakistani politician.He was elected as a member of the National Assembly of Pakistan (MNA) from June 2013. Ch. Shehbaz Babar is one recently joining members of the Pakistan Muslim League (N) and although an inexperienced campaigner, his victory in the first election which he contested didn’t show any signs of being immature in election strategies.Ch. Shehbaz Babar is well learned and significantly qualified to be holding a position as a member of National Assembly.[1] Biography

Chaudhary Shehbaz Babar’s career in politics still a young one that began in 2013 when he was given the ticket by Pakistan Muslim League (N) to contest elections. Being his first time in elections he was able to win and got himself a seat in the National assembly from NA-79 seat.His political career took a step up when he was appointed as the Federal Parliamentary Secretary for Information and Broadcasting and also held the position as a member of National Assembly Standing Committee for Commerce, Textile and Health. His appointments to these position of great importance clearly represents the high regard he is held in amongst the party leadership. His career and confidence both would have received a huge boost following these appointments.