By tauseefanwarJanuary 17, 2018No Comments5 Mins Read 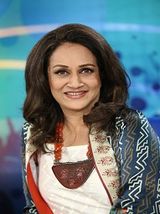 
Bushra Ansari is an accomplished and well-known Pakistani actress whose presence on the screen can’t go unnoticed. She is popular for portraying the comic roles with perfection. After so many years in the showbiz industry, her popularity and demand are still high. Bushra is a recipient of the Pride of Performance Award. This article has all the information about Bushra, including Bushra Ansari Biography and Bushra Ansari Family. Bushra Ansari is one of the legendary names of the Showbiz industry, whose personality and persona are unmatchable. She is the biggest star of the industry who make people laugh with her comic roles and make people cry with her intense characters. Bushra is a super talented Pakistani actress, Host, Singer, Writer, and producer who is the part of the Showbiz industry since the 1960s and still has the potential to give tough competition to all the current actors. She has bagged Pride of Performance award for contributing a lot in the industry.

She was born on 15th May 1953 in Karachi. She has lived a few years in Islamabad after her marriage. In 1982 she moved to New York with her husband that later proved to be the wrong decision, so they came back. Currently, Ansari is living in Karachi with her family.

Bushra did her schooling from Lady Griffin School, Lahore. Later she did intermediate from Lahore College for Women University. She holds the degree of Bachelor that she obtained from Waqarunnisa College, Rawalpindi.

Bushra was born to a well-known family. Her father, Ahmad Bashir, was an accomplished Pakistani writer, Journalist and Film Director. Her sisters Asma Abbas and Sumbul Ansari likewise belong to the Showbiz industry and are equally talented artists of Pakistan. Bushra got married to Iqbal Ansari in 1978, who belongs to the same field. Unfortunately, in 2020 she broke the news of her divorce in a show that made everyone surprised. Her niece Zarra Noor Abbas is ruling the television screens with her phenomenal acting. Her daughters Meera Ansari and Nariman Ansari don’t join the Showbiz.

Bushra’s career as an actress gave her a huge acknowledgment and love from across the globe. She has done theatre for a long time along with her fellow actors. Be it a comic role or an intense character; she never failed to impress everyone with her unique style and strong acting skills. With her debut serial, she succeeded in winning the hearts of people. Bushra has given many unforgettable serials to the industry that are still considered the best of best. She is known for playing a comic role in popular barat series. She has likewise appeared in a few Lollywood films, including ‘Ho Mann Jahan,’ opposite Mahira Khan, Adeel Hussain, and Shehryar Munawar.

She has shown her amazing hosting skills multiple times. Bushra hosted a television show ‘Brunch with Bushra’ where she got a chance to interview various personalities from Politics, Cricket, and Showbiz. She has once interviewed Altaf Hussain that was her most famous interview. She likewise was seen hosting multiple Award functions.

Bushra has proved that one can be the master of many skills. She inherited the writing skills from her father. Bushra made her debut as a writer in 1994 by writing the script of drama serial ‘Neeli Dhoop.’ She has likewise written the scripts of various other Pakistani dramas and received love and appreciation for that. She is one of the well-known writers of our industry.

In 1965 Bushra made her screen debut when she was hardly nine years old. She appeared in a children’s program where she got a chance to sing and do acting likewise. Later, Buhsra learned singing from her teacher Amir Heidary. Bushra actively took part in various singing competitions in college, and her father fully encouraged her for that. The program that gave Bushra a platform is ‘Kaliyaan,’ where she got a chance to show her singing and acting skills to the world.
In 1981 Bushra started singing Jingles that increased her popularity. Her parodies gave her more success, and people started loving her more. She is the first Pakistani actress who released first Rap’s parody Album. She also got a chance to become a judge on ‘Pakistan Idol.’