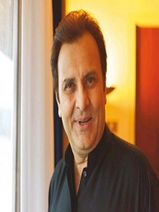 Behroze Sabzwari is an accomplished and the most cherished Pakistani television and film actor who has also worked as a Radio presenter in the past. Behroze remained a part of various successful plays and films. His son Shehroze Sabzwari likewise serving in the same field. This article has all the information about Sabzwari, including Behroze Sabzwari Biography and Behroze Sabzwari Family. Behroz Sabzwari is a senior and legendary Pakistani television and film actor who took a start as a Radio Presenter and today he is listed as the most confounding actor of our industry. He is a handsome, skilled and prodigious celebrity who is still ruling the television screen despite so many years. Behroze became a part of this industry in the 1970s and received the Pride of Performance for giving successful 40 years of his life to this field. He has a catchy personality while his stamina is unbelievable.

He was born on 16th February 1957 in Karachi. Currently, Sabzwari is living in the same city with his family.

Behroze is the only son of his parents. His father served as a novel officer. Behroze got married to Safina Sheikh who is a sister of legendary actor Javed Sheikh and Saleem Sheikh. They are blessed with a son Shehroze Sabzwari who likewise belongs to the Showbiz industry. His daughter in law Syra Shehroze is a talented actress and model however both ( Syra and Shehroze) have parted their ways. Behroze’s nephew Shehzad Sheikh and Niece Momal Sheikh are likewise the stars of the Showbiz industry.

Behroze gave a start to his career in the 1970s as a radio presenter for Radio Pakistan. However, after a few years, he got an opportunity to work in a serial and this is how his acting career started that remained successful and he succeeded in winning everyone’s heart across the globe. He made his debut at a young age in a Children’s play Dadajan Nanajan. Afterward, Behroze got an offer to show his acting skills in multiple dramas and films and he never disappoints anyone.