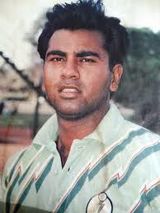 
Basit Ali is a former cricketer who served as a batsman in the Pakistani team. He was a right-handed batsman who used to play the pull and hook shots to take charge of the fast bowlers. His favorite cricket shot areas were cover and point, that’s why many would find similarities in his batting style to the legend batsman Javed Miandad. This article has all the information him, including Basit Ali Biography. He opened his eyes on 13th December 1970 in Karachi. Currently, Basit is a resident of the same city Karachi.

Basit started playing professional cricket from domestic cricket at the very young age of 15 years in 1985. After that, he played eight years in first-class and List-A cricket then he got selected in the national team in 1993.

In 2016, Basit also had given a chance as a coach for National Pakistan cricket. He has coached different teams after he retired from cricket.

He works as a cricket analyst at different TV channels, and he also has his own YouTube channel, where he shares his views.