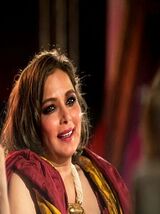 
Babra Sharif is a legendary former film actress of Pakistan who has worked in 100 movies and won numerous awards for her exceptional performance in every film. Despite several years, she is still considered one of the remarkable and evergreen actress whose name can’t fade away from the list of Best Actress of all time. This article has all the information about Babra, including Babra Sharif Biography and Babra Sharif Movies. Babra is a senior and celebrated Pakistani film actress who is associated with the Showbiz industry for a long time. She has acted in multiple films till now and has garnered various awards for her work incorporating Nigar Award for her tremendous acting. Like many other actresses, Babra too faced a decline in her film career, yet she managed to rise again and started giving superhit movies after a short break from the industry. Babra has worked with many senior and notable actors of the industry, including Sultan Rahi, Waheed Murad, and others. She is known as one of the pleasing actresses who grabbed the Lux Icon Beauty Award in 2003.

She was born on 20th March 1954 in Nankana Sahib. Currently, Babra is living in Lahore with her family.

Babra didn’t remain lucky in her love life as she got divorced after a few years of marriage. She got married to film star Shahid Hameed with whom she has a son Kamran Shahid. Kamran likewise associated with the Showbiz Industry.

Even after restoring herself in the film industry Babra made an important decision at the end of the 1990s by quitting acting forever. 1997 proved to be her last year in the Showbiz industry, and till now, she never made an appearance in a small or big screen. She did work as a model a few times.