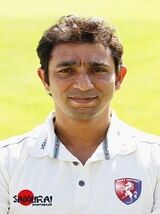 
Azhar Mahmood is a former Pakistani cricketer who lives in the United Kingdom and is a British citizen after he married a British Pakistani in 2003. He has represented Pakistan in both Tests and ODIs and has also been part of Pakistan’s coaching staff. He worked as a bowling coach of the national team till the year 2019 for a few years. Azhar was a useful all-rounder, and he could bat in the middle order, and also he could move the ball with pace. This article has all the information about Azhar, including Azhar Mahmood Biography. He was born on 28 Feb 1975 at Rawalpindi, Punjab. Currently, Azhar is living in the UK with his family.

He got married in 2003 to a British Pakistani Ebba Qureshi. He lives with his wife and three children in the UK these days and became a British citizen in the year 2011.

Azhar started playing first-class cricket from the 1993-94 season. In the same year, he also played in List-A. He worked hard and practiced regularly to come out as an international cricketer. It is said that he opposed by his father to play cricket, but later, his high interest and passion in the game made his family accept his profession.

Azhar made a mark in international cricket when he scored an outstanding hundred against the South African team. This made him inspiring youngster from the very start as the South African bowling was one of the best in the world when he made that century. He was part of the national team from 1996 to 2007.

Azhar played many ODIs for Pakistan. He started his international career in ODIs against India on 16 September 1996 in Toronto. He could impress in the match neither with bat nor ball. He was a regular part of playing eleven in the world cup 1999. He also played in proceeding world cups of 2003 and 2007. He left out of the team and made a comeback in 2007 but could not cash the opportunity and left out of the team.

Azhar played in the T20 leagues and County cricket from his last years in the national team. He played in the ICL and then in IPL but soon left for England and played regular cricket there. He tied the knot with a British Pakistani and registered as a British Citizen in 2011. Azhar played in the County for Kent and Surrey team. He made the Pakistan team’s bowling coach in 2016 and served at the post till 2019. Azhar is full of skills and experience, and considering this, he has a bright future ahead of him.