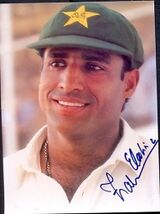 
Zahoor Elahi is a former Pakistani top order right-hand batsman. He could only play international cricket, dropped from the side, and never made a comeback. He is the brother of former Pakistani cricketers Manzoor and Saleem Elahi. He had a long and outstanding first-class career. His nephew Babar Manzoor has also featured in first-class matches. This article has all the information about Zahoor, including Zahoor Elahi Biography. Zahoor received his early education from his hometown and completed his bachelor’s afterward.

He is the brother of former cricketers Manzoor and Salim Elahi. His nephew also played in first-class cricket. Zahoor is married and currently resides in his hometown.

He started playing first-class and List-A cricket from 1985-86 domestic season. He used to bat at the top and achieved a lot of success from the start of his professional cricket career. It took him ten years to get selected in the national side for the first time.

Zahoor was part of Pakistan’s domestic cricket for ten years before he made his international debut.

Zahoor also played a couple of Tests but could not make a mark on his three Test innings. He played his first test on 21st November 1996 against New-Zealand and also featured in the next test against them on 28th November but could not perform as per expectations. He got out of the team afterward and continued his first-class cricket like before. He was a very classical batsman at the domestic level but could never cash in his local form at the international level. His first-class stats reflect on his brilliance in batting.