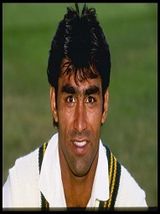 Ata ur Rehman’s career has had its ups and downs. Spotted playing cricket on the streets of Lahore, he was plucked from obscurity and found himself playing for a very strong Allied Bank team at the age of 16. Miraculously a year later he was touring England with the Pakistan team alongside legends such as Wasim Akram, Javed Miandad, Inzamam ul Haq, Salim Malik and Waqar Younis. Ata made his debut at Edgbaston in June 1992 alongside Inzamam and Amir Sohail, taking the wickets of Alec Stewart, Alan Lamb and Mark Ramprakash. Former fast-bowler Ata-ur-Rehman, who had been hired by the Pakistan Cricket Board (PCB) as head coach of the Fata region, has said that he has unfinished business to complete after spending years away from the action. The 37-year-old was banned for life in 2000 for perjury but was cleared by the International Cricket Council (ICC) in 2007 but according to him as his peak years were wasted in fighting to get his name cleared, so he feels that he haven’t served Pakistan cricket as much as he should have. He was born on 28th March 1975 in Lahore, Punjab Pakistan. [1] Biography Biography

Ata-ur-Rehman’s life ban was lifted by the International Cricket Council (ICC) in November 2006. Ata represented Derbyshire in four Second XI Championship matches during 2007 while looking to resurrect his career in county cricket. He spent the 2009 season playing for Widnes in the Cheshire County Cricket League. He also played for hem health forsook in 2010 where he showed a very competitive spirit scoring plenty of runs, and taking a lot of wickets. In 2004, he was running a sports goods shop in Lahore. On 11 June 2013, Ata signed a deal with Nottinghamshire Premier League side the West Indian Cavaliers, signing on until the end of the season. In March 2014 Ata joined Kearsley Cricket Club in the Bolton Cricket League in Lancashire, a club he had previously represented as a deputy professional some years earlier. [2] Career Career

A former Pakistani pacer who was banned for life on the recommendation of Justice Qayyum Commission in 2000, broke into tears while talking about his ban. “I was made a scapegoat by the commission for speaking the truth,” Rehman told SAMAA in a telephonic interview from London, where he runs a taxi. “I am driving a taxi in London despite the fact I was blessed with cricketing talent by the Almighty,” he said. In 1998, Ata-ur-Rehman claimed that Wasim Akram had paid him 100,000 Pakistani rupees to bowl badly in a one-day match held at Christchurch, New Zealand, in March 1994. At Justice Malik Qayyum’s Commission into match-fixing, Ata-ur-Rehman initially denied that he had made the allegations against Wasim Akram. However, when the statement was produced he changed his story and in camera confirmed the affidavit he had previously given. “Speaking the truth is equal to hanging yourself to death,” he said. Rehman said that he would expose all cricketers during a special TV interview. “Why wasn’t Inzamam ul Haq banned? I was banned for changing my statement,” he said. “I was given justice by the International Cricket Council, not by Pakistani courts,” he lamented. [5] Banned for life