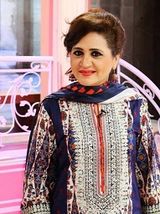 
Asma Abbas is one of the most graceful and accomplished actresses of our Pakistani industry who has contributed a lot by giving major hits through her phenomenal acting. She belongs to artistic family background and her only daughter is likewise in the same field. This article contains detailed information about Asma Abbas biography, Asma Abbas family and Asma Abbas dramas. At whatever point we talk about the names of a portion of the shines and gifted on-screen characters of Pakistan TV industry, we can always remember the name of this evergreen personality. She is a standout amongst the most skilled on-screen characters of Pakistan TV and nobody can deny this reality. She began her profession during the 1980s in Pakistani dramas and as yet working in the industry. She played such a large number of roles in Pakistani Dramas.

She was born on 23rd Feb 1958 in Karachi, Pakistan. Currently, she still resides there with her family.

She belongs to a talented and conventional family where talent runs in her genes. Her father Ahmad Bashir was a Pakistani writer, Journalist and Film director  while her mother Mehmooda Ahmad Bashir was a writer. Her sister Bushra Ansari is a prominent name in the Showbiz industry whose contributions in the industry are worth remembering. Her daughter Zara Noor Abbas is also a Pakistani actress who is winning the hearts of people day by day while her son in law Asad Siddiqui is also a prominent name in the industry.

A few times ago, the news in regards to TV performer Asma Abbas is determined to have cancer surfaced on social media however at this point the senior artist has been fully recovered and discussed her fight with the disease on Faysal Quraishi’s morning show. Her determination and bravery is an inspiration for cancer patients who lose their hope. She told that after knowing that I am a cancer patient I only thought for 2 hours in a locked room and then decided to deal with this disease with bravery and even if I lose the battle I will consider it God’s will.

She is indeed standout amongst the most awesome and skilled on-screen characters of Pakistan film and TV industry. A conceived entertainer, she gives her 100% in acting and easily plays out whatever is wanted of her. Her dramatization ‘Chunnri’, which screened on PTV, picked up prevalence and was to a great extent acclaimed by the watchers. It tends to be on the whole correct to state that this show built up an enthusiasm for open to watch Pakistani dramas. She has acted in various TV serials both genuine and extraordinary dramatizations and comedies on private channels as discussed in content.pk. She has also acted in a Pakistani film ‘Maan Jao Na’.