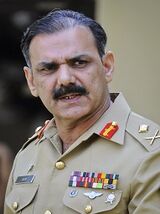 
Asim Saleem Bajwa is a retired Lieutenant General. He has served as DG Inter-Services Public Relations (ISPR) from 2016 to 2017. After his retirement, he was succeeded by Asif Ghafoor. Asim has served as Commander Southern Command in 2017. Currently, he is the Chairman of CPEC authority and special assistant to the Prime Minister on Information and Broadcasting. This article has all the information about Saleem Bajwa, including Asim Saleem Bajwa Biography. Asim is a retired military officer who has served on key posts. During his service, he served as Inspector General Arms at General Head Quarter. His importance increased after his retirement when he was appointed as the Chairman of CPEC authority for four years. It was due to the challenges that CPEC faced in the region. It is an important post as CPEC is considered as a game-changer for Pakistan. He was recently appointed as a Special Assistant to the prime minister on information and broadcasting.

Bajwa was born on 13th November in Sadiqabad.

Asim Bajwa is the son of Saleem Bajwa. He is the brother of Taloot Bajwa and Tanveer Bajwa. Asim is married and has three children.

Asim Saleem is an educated professional. He has graduated from Command and Staff College Quetta. Later he joined National Defence University and got a Master’s degree in War studies. He has also studied Defence studies from King’s College London.

Asim has a vast professional career. He has worked on many important positions in the army. He joined the army in 1984 when he was commissioned in 34 Punjab Regiment at Pakistan Military Academy Kakul. He has led an anti-Tank Battalion, Infantry Division, and an Infantry Brigade. One of his major duties was serving as a brigade major at an infantry brigade where he served as Chief of Staff at Strike Corps. Asim also has experience as a course instructor at PMA Kakul and Command and Staff College Quetta.

Before his promotion to the rank of major general, he served as military secretary to the President of Pakistan. In 2010, he was promoted to the rank of major general and in 2015, he became lieutenant-general. He also assisted Musharraf in writing his book ‘In the Line of Fire’. On 4th June 2012, he was appointed as DG ISPR after the retirement of Athar Abbas. He served as a DG ISPR for 4 years from 2002 to 2006. In 2016, he was appointed Inspector General Arms at GHQ and later Commander Southern Command of Pakistan Army

As a DG ISPR

Asim has been awarded with Tamgha-e-Basalt and Hila-e-Imtiaz for his services to the army.