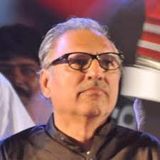 Arif Alvi who is also a dentist by profession started his political career in the 1990s and served as the member of Pakistan Tehreek-e-Insaf. After his long-lasting efforts and hard work, he became the 22nd President of Pakistan. He is the son of Habib ur Rehman Alvi who was the dentist of India’s first Prime Minister Jawaharlal Nehru Arif Alvi is not only a Politician but is also a dentist by profession and is quite handling his both professions very well. He was born on 29th August 1949 in Karachi and is married to Samina Alvi. He has 3 daughters including Naima Alvi, Marhama Alvi, and Radhia Alvi.

The current president of Pakistan Dr. Arif Alvi has connections with India too because not only his family migrated to Pakistan from India, in fact, his father Dr. Habib ur Rehman Elahi Alvi was the dentist of India’s first Prime Minister Jawaharlal Nehru. He inherited the profession of a dentist from his father who practiced dentistry in India before partition and opened a dental practice in Saddar, Karachi after migration. His family also had the connections with the Jinnah family

He procured his dental degree BDS (Dentistry) from de Montmorency College of Dentistry and Master of Science certificate in Prosthodontics from the University of Michigan, Ann Arbor in 1975 and Master of Science in Orthodontics in 1984 from University of the Pacific, San Francisco. In 1997, Alvi was pronounced a Diplomate of the American Board of Orthodontics. He was the essential creator of the constitution of the Pakistan Dental Association and has been chosen the President of the Pakistan Dental Association.

Arif Alvi started his political career in the 1990’s when he joined Pakistan Tehreek-e-Insaf as a polling agent and stuck by his side since the PTI formed. He contested his first Elections in 1997 from Constituency PS-89 for the seat of Provincial Assembly but unfortunately couldn’t succeed and lost from Saleem Zia. He again contested the Elections of 2002 for the same seat from PS 90 Karachi but faced defeat but didn’t lose hope. In 2013 General Elections he was elected to the National Assembly of Pakistan against Khushbakht Shujat and gave him major defeat and became the only member of PTI who won the National Assembly seat in 2013. In 2016 he served as the president of PTI Sindh.

Arif Alvi was nominated by Prime Minister Imran Khan for the Presidential post. After contesting the elections he becomes the president of Pakistan on 4th September 2018 by giving a major defeat to his opponents Aitazaz Ahsan and Fazal-ur-Rehman. Arif Alvi received 320 electoral votes, Fazlur Rehman 159 and Aitzaz Ahsan 120 votes. While talking to media he said that he is not only the president of Tehreek-e-Insaf infact the president of all the Political parties and the Nation.

President Arif Alvi on Tuesday 27th November initiated the tenth International Defense Exhibition and (IDEAS – 2018) with the determination that arms creation in the nation has been and will dependably be for guard purposes and never for offense. Paying shining tribute to the Pakistan Army for anchoring the national border and their executed venture to counter-terrorism, he said the penances rendered by the military of the nation specifically and individuals, by and large, must not be neglected by the world network. Sorted out under the aegis of Defense Export Promotion Organization (DEPO), the IDEAS 2018 unites protection industry players from various parts of the world. “There will be 522 exhibitors from 50 nations this year,” the media executive of DEPO, Commodore Tariq Javed said in a media preparation.