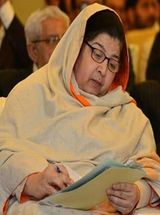 Anisa Zeb Tahirkheli has risen in the arena of politics from grass-root level. At the age of 18 years, she took part in the public demonstration against the Martial law regime. She was known for fiery political oratory and selfless service for the rights of students during her studentship days at University of Peshawar. Therefore she repeatedly elected to the union office of Department of Geology and then to the University Union with record margin of votes hitherto unbeaten.

Anisa Zeb is highly qualified. First she did BSC (HONS) and LLB. Later she acquired a Masters degree in Social Sciences.Anisa Zeb Tahirkheli is living happily with her family. She belongs to a very strong and religious family.[1] Education and Family After completing her Masters in Geology, She remained on various student’s and youth offices as one of the main leaders at the provincial and central level. She was eventually elected as a Member of the Provincial Assembly in 1988 and remained at the side of the Chief Minister Aftab Ahmad Khan Sherpao to assist him on students, women and youth affairs. She was appointed as the Provincial Spokesperson and Incharge of the Party Secretariat in 1990 after the dissolution of the government by the then President Ghulam Ishaq Khan by resorting to the 8th Amendment. However, Mr. Sherpao was re-elected as the Chief Minister of the N.W.F.P (Now KP) in April 1994, Ms. Tahirkheli had the honour of serving the Party as Incharge of the Provincial Secretariat as well as the official committees. She was nominated to Most active committee at that time was the Provincial Consultative Committee on Women.

She also became an official delegate of Pakistan to the Beijing world Conference on Women in 1995. She remained loyal to the party particularly to the leadership of the Mr. Aftab Ahmad Khan Sherpao , when was much wrongly shown the exit door from his parent Party as a result of a huge conspiracy in 1998. Naturally the founder leaders of N.W.F.P(Now KP) Party chapter came openly to support Mr. Sherpao and resisted against such whimsical order by the high command. Pakistan Peoples Party (Sherpao) took part and returned as second higher scorer, particularly withstanding the unexpected political storm of Mutahida Majlis-e-Amal(MMA) in the Provincial Assembly. Despite in keeping this squall the PPP(S) was also successful in keeping its representation in the National Assembly of Pakistan.

Ms TahirKheli was then elected as a Senator in March 2003 and initially became the Chairperson of the Senate Functional Committee the “Problems of less-Developed Areas”. Due to her remarkable performance in the Senate, She was elevated to the position of the Federal Minister of State for Information & Broadcasting in September 2004. In May 2006, She was given the portfolio of the Federal Minister of State for Education that She kept till November 2007. After that She was given the Chairpersonship of Senate standing Committee on Industry & Production that She held till the completion of her tenure in March 2009. She was elected as the Party’s Central Secretary General when Pakistan Peoples Party (Sherpao) was renamed as the Qaumi Watan Party Oct. 2012. In May 2013, the Party once again listed her as top candidate for the Reserved Seat of woman in the KP Provincial Assembly.

She remained as the Parliamentary Secretary of the Ministry of the Environment and the key member of various working Groups most especially one on the Local Government which came up with the new law on the creation of the Local Government set up in Province. After the QWP decided to quit the coalition government, Ms. TahirKheli , became the Chairperson of the standing Committee on Administration along with member of several other Committees. She was re-elected as the Central Secretary General of the QWP in the Intra-Party Elections of 2014. A Committed Party Member and a trusted companion of her leader Mr. Aftab Ahmad Khan Sherpao, She has devoted her services for the success of the Party and for safeguarding the rights of the down-trodden masses. She has also served as a Minister of labour and Minerals KPK.[2] Political Career