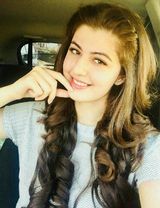 
Anam Gohar is a stunning Pakistani Model and an actress who is in the industry since 2012 and has been seen performing in various dramas. Her husband Gohar Mumtaz is likewise in Showbiz who is a phenomenal singer and an actor. This article contains all the information about her including Anam Gohar Biography and Anam Gohar Dramas. Anam Gohar earlier known as Anam Ahmed is a stunning Pakistani model and actress. Her tall height, alluring face, and her personality made it very easy for her to become a supermodel of Pakistan Industry. After being born in Islamabad her family shifted to Dubai but her passion and dream forced her to come back to Pakistan and pursue her dreams. It wouldn’t be wrong to call her one of the most beautiful actresses of Pakistan.

She was born on 22nd June 1990 in the beautiful city of Pakistan Islamabad. Currently she resides in Karachi with her husband.

The beautiful couple got engaged in 2012 in Islamabad and in 2014 they both get hitched and are living a blessed life. Gohar Mumtaz himself is a very talented and well-known Pakistani singer as well as an actor in the industry.

She joined the industry as a model at a young age and wound up one of the best models in a brief span. She began her showbiz vocation as a model and came into the spotlight after winning Veet Model Hunt Contest held in 2012, holding the title of Miss Veet 2012. Anam has worked with a portion of the best style originators of Pakistan and she is regularly observed on the fronts of well-known design magazines. After becoming a successful model she tried her luck in acting.

Her each and every role demonstrates a fact that how hard she trying to improve over her acting skills. She has given few best drama serials including ‘Ye Raha Dil’, “Ye Ishq’, “Atish’ and few others. She also told media that the second lead role in Bin Roye’ which was later played by Armeena Khan was asked by her first but due to personal reasons she refused to play it. She is grooming herself in the acting field day by day.