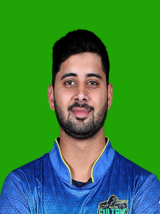 Ali Shafiq is a Pakistani cricketer who is a right-arm medium-fast bowler playing in domestic cricket. He is a young talented, and sharp bowler inspired by Waqar Younus’s bowling. Currently, he is doing well in domestic cricket. He bowls with a speed of around 140 km/h and can move the ball. This article has all the information about Ali, including Ali Shafiq Biography. In 2017, Ali started playing in first-class cricket. He successfully bowled and took 59 wickets in 25 innings so far. He has played 14 matches and has bowled with an average of 14.96. He has achieved five wickets haul three times, and five times four wickets haul with 8/70 his best bowling in an innings. Shafiq has outstanding bowling figures of 12/120 in a match. While representing in List-A cricket, Ali has played 16 matches and has 17 wickets with an average of 39.52 in bowling. He has the best bowling figures of 3/27. Ali also plays in the T20 format and has participated in 13 matches and gained 13 wickets with the best bowling of 3/21. His bowling average in T20 is 25.53 and 7.84 economy per over.

Ali Shafiq was born in Daska, Punjab, on 16th November 1996. Currently, he is still living in his hometown.

He completed his school education and went for college education based on his sports achievements.

He belongs to a Punjabi family from Daska. He is currently unmarried.

Ali started his early cricket in his college life and selected for PCB under-19 tournament later he joined first-class cricket. Now he is playing domestic cricket in all formats and looking forward to playing in international cricket.

In 2019, Ali Shafiq joined Multan Sultan in PSL. He played two seasons and took 2/11 in his PSL debut match against Islamabad United and awarded the man of the game. In 2020 PSL season 5, he got added in playing squad in few matches and performed excellently in his first match with 2/31 against Peshawar Zalmi in PSL 5.