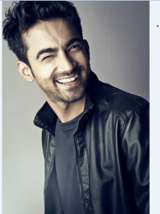 
Ali Safina is a tall and good looking Pakistani VJ, actor and model who is in the industry for so long. He got married to another Pakistani actress Hira Tareen and both are making their names in the industry. This article is a blend of information about Ali Safina biography, Ali Safina wife and Ali Safina Dramas. Did you know that he is a VJ turned actor? Ali is a tall and handsome VJ turned actor who is best known for his comic roles in various dramas of Pakistan. He is in the industry for so long and has achieved great success over these years. His tall height, good looks and charming personality makes him enchanting and captivating. Othar than an actor he is also an owner of FM 96. His sister in law Zara Tareen is likewise a the showbiz personality.

He was born on 18th December 1983 in Multan city but he soon moved to Oman where he spent his childhood and received Education. Currently, he resides in Karachi with his family for his work.

His height is what attracts people the most. He is 6 feet tall which makes him more striking and fetching.

He got married to one of his closest friend Hira Tareen who is also an actress and a model. The couple got married in 2013 and are living a blessed life with their daughter Mahgul Ali. According to Ali, it wasn’t loved, at first sight, they fell in love after becoming close friends.

He completed his high schooling from Oman and then he went to Scotland at  Glasgow Caledonian University to have his degree in Mechanical engineering. The pressure coming from his family forced him to hold this degree otherwise he always wanted to join showbiz without having any interest in engineering.

He began his showbiz profession in Pakistan as a VJ and got colossal distinction and achievement. He has filled in as a VJ with AAG TV channel and he is one of the mainstream youthful male VJs of Pakistan. He has facilitated many best television shows of various stations and he is well known for his comical inclination. Few of the popular shows of his as a VJ incorporate ‘Hun Dass’ and ‘Milk Sheik’ of AAG TV. He has likewise filled in as a DJ in a neighborhood radio of Glasgow, Scotland during his education.

His good looks and his perfect height makes him a perfect model. He has worked with many huge designers and for many big names. He has likewise walked on ramp several times along with his wife Hira Tareen also.

He made his debut on a small screen in 2011 with a drama serial ‘Takkai Ki Aye gi Barat’ along with Bushra Ansari, Asad Siddiqui, Saba Hameed, and many others. His comic role in that serial made him popular and earned a lot of admiration. He has worked in many serials but is best known for his comic roles.  His character in ‘Suno Chanda’ starring Iqra Aziz and Farhan Saeed is one of his best performances till now.

He is currently a notable wide screen performer as well. He made his acting introduction in Lollywood in 2015 in the Pakistan film ‘Jalaibee’ starring Danish Taimoor and Zhalay Sarhadi. The character of Ali ‘Bugga’ in this motion picture got colossal acclaim and he got huge hype through this movie. He is additionally a lead on-screen character of the first online film of Pakistan ‘Oye Kuch Kar Guzar’ released in 2016. He is the only Pakistani actor to work in an online movie.

His social media accounts where he interact with his fans include