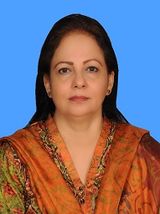 Aisha Ghaus Pasha is a Pakistani politician who is associated with Pakistan Muslim League N for a long time. She is one of the educated Politicians of Pakistan who holds the degree of Doctor of Philosophy. She is the former Provincial Minister of Punjab for Finance. This article contains all the information about her including Aisha Ghaus Pasha Biography and Aisha Ghaus Pasha Family. Dr Aisha Ghaus Pasha is a Pakistani Politician who is a member of Pakistan Muslim League N since 2013 and is currently running the seat of the National Assembly. Previously he served as Provincial Minister of Punjab for Finance appointed by Shahbaz Sharif. Other than a politician she is also an economist and a researcher.

She was born on 3rd March 1962 in Lahore where she spent all her life. Currently, she resides in the same city with her family.

She is a wife of the recognized economist of Pakistan who has been the Chairman of the Planning Commission’s Panel of Economists, an autonomous warning board of trustees for the legislature. He was also the dean of Beacon House University in the past.

Her political career started when she ran for the seat of the provincial Assembly on a reserved seat while being associated with the Pakistan Muslim League N in Pakistan General Elections 2013. In 2015 she was appointed as the Provincial Minister of Punjab for Finance by the former Chief Minister of Punjab Shahbaz Sharif. After successfully completed her tenure she ran for the seat of National Assembly in 2018 Pakistan General Elections as a candidate of PMLN on a reserved seat.