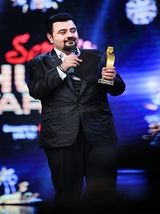 Ahmad Ali Butt is an extremely talented Pakistani television and film actor who knows how to make people laugh with his comic acting. Apart from an actor, he is likewise Hip Hop rapper and Rock music Keyboardist. Ahmad is a son of late legendary singer Zill e Huma and brother in Law of Kubra Khan. This article has all the information about Ahmad, including Ahmad Ali Butt Biography and Ahmad Ali Butt Family. Ahmad is an acknowledged and multi-talented Pakistani actor, Host, Rapper, Director, Producer, and Keyboardist. Talent runs in his genes because of being born in a popular and talented Jehan Rizvi family. Though Ahmad started his career as a singer yet he is known for performing various characters with perfection. His comic acting is loved and appreciated by many people. One can’t stop themselves praising his sense of humor on the screen.

He was born on 6th March 1976 in Lahore. Currently, Ahmad is living in Karachi with his family.

Ahmad holds the degree of graduation that he obtained from London.

Ahmad belongs to an artistic and popular family. His mother Zill e Huma was the popular singer of her time and is still remembered for her iconic and unforgettable songs. His grandmother Noor Jehan doesn’t need any introduction. She is a legend who is still dearly missed. His cousins Sonia Jehan and Sikandar Rizvi likewise belong to the showbiz industry. Ahmad got married to Fatima Ahmad and is blessed with a son Azaan Ahmad Butt. His sister in law Kubra Khan is another stunning actress who is ruling the television screens.

Ahmad is remarkable as a host too who never let any award shoe boring and dull. He has hosted various Award shows including Lux Style Awards several times. Butt also remained a part of ‘Pepsi Battle of the Band’.