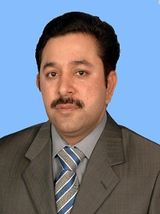 Mohammad Afzal Khokhar or Malik Afzal Khokhar is a Pakistani politician who is associated with Pakistan Muslim League N since the start of his career as a member of the National Assembly. He also served as a member of the Provincial Assembly when he ran for this seat in 2002 Pakistan General Elections. In December 2018 he was seized in a land grabbing case but granted bail the very next day.

He was born on 6th April 1974 in Lahore where he spent all his life. Currently, he resides in the same city with his family.

He holds the degree of Bachelor of Arts which he attained from the University of Punjab, Lahore.

He belongs to a political family where his brother Malik Saif ul Malook Khokar is likewise a Pakistani politician who is currently working as a member of the Provincial Assembly while being attached with the Pakistan Muslim League N. His brother Malik Shafi Khokhar is also a Pakistani politician and a part of Pakistan Muslim League N.