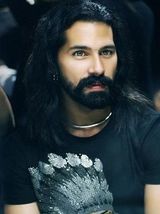 
Abbas Jafri is a former Pakistani cricketer and a current Pakistani model and a politician who is in the limelight for a long time and today he is being recognized everywhere because of his unstoppable hard work. He is a member of Pakistan Tehreek e Insaf who won the General Elections 2018 by securing 30,687 votes. This article contains all the information about him including Abbas Jafri Biography. Syed Mohammad Abbas Jafri is a multi-talented man who is a former cricketer, a current model and a politician too. After quitting cricket he joined Showbiz and while continuing modeling he joined Pakistan Tehreek e Insaf in 2018 and won the elections. He is the one who introduced the trend of beard in the Modeling field and has ruled the Modeling Industry for so long. He has earned a huge amount of love and fame over all these years with his diligence of day and night due to which he is being recognized internationally too.

He was born on 30th November 1987 in Karachi where he spent his early life. Other than Karachi he also lived in Texas because of his father’s business there. Currently, he still resides there with his family.

He started his career as a cricketer and played the Pakistan Under-19 cricket team a few times. He also remained the part of domestic cricket tournaments. After a few years he quit cricket after getting an offer of Modeling from the Industry.

He is a top and unreasonably one of the hot models of the Pakistan Fashion industry who has worked with almost every top-class fashion designer of Pakistan including HSY, Saniya Maskatiya, Faraz Manan, Nomi Ansari, Omer Farouk and some more. He has done modeling for many top designer brands including Bareeze Man, Ziggi, Khaadi, Republic, Ahmed Bham, Ismail Farid, Jazib Qamar, Ahmad Bahm and many more. He is honored with the Best Male Model Award many times because of his hard work which he put in every time over all these years.

After getting huge recognition and praise as a Model he decided to be a part of Politics side by side. He contested the General Elections 2018  for Sindh Assembly from the Constituency PS-125 (Karachi) as a member of Pakistan Tehreek e Insaf and luckily won the seat by giving a major defeat to his opponent.