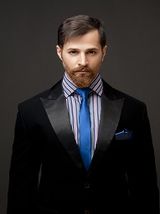 
Naeem Haque is a handsome Pakistani model, actor and a CEO who is the part of the Showbiz Industry for a long time and has earned his place in the hearts of people with his hard work and talent. He is a grandson of a famous late Pakistani producer Agha Ghulam Mohammad. This article contains all the information about him including Naeem Haque Biography and Naeem Haque Dramas. Naeem is a multi-talented man who serves as an actor, model, Interior Architect and CEO. He is a tall, handsome and fair complexion man who lets every other girl fall for him. He has earned a huge amount of love and fame over all these years with his diligence of day and night due to which he is being recognized internationally too. He stepped into the Showbiz industry after the footsteps of his grandfather Agha Ghulam Mohammad who was a well-known producer of his time.

After completing his Schooling he went to Saint Martin’s School of Art in London. Later he studied in the National College of Arts, Lahore from where he attained the degree of Interior Architect. Before making his debut in the Showbiz industry he has also learned acting at the Asian Institute of Film & Television.

He belongs to an artistic family where his grandfather Agha Ghulam Mohammad was a well recognized Pakistani producer of the late 60s and 70s who earned huge fame at his time. This handsome model turned actor is still single and fully devoted to his work.

He made his debut in Modeling by showing up in a music video ‘Na re Na’ sung by Ali Azmat and ‘Chal Dil Mere’ sung by Ali Zafar. He is a top and excessively one of the hot models of the Pakistan style industry who has worked with almost every top-class fashion designer of Pakistan including HSY, Saniya Maskatiya, Faraz Manan, Nomi Ansari, Omer Farouk and some more.   He has likewise done numerous photoshoots as a model and has been the face of many top planner brands. He has additionally shown up in various Television advertisements.

After getting fame in the Modeling field he made his debut in acting in 2016 when he was offered the role of Zohaib in a drama serial ‘Sangdil’ opposite Ghana Ali and Kiran Haq. The next year he did a supporting role in a drama serial ‘Khan’ with Legendary Noman Ijaz, Saba Hameed, Shaista Lodhi, Aijaz Aslam and few more. He made his debut on a big screen in 2017 in the movie ‘Yalghar’ starring Shan Shahid, Bilal Ashraf, Gohar Rasheed, Armeena Khan and more. The movie went well at the box office and did a collection of 20 crores. The next year he was seen in another film ‘Maan Jao na’ which was a Pakistani romantic comedy film directed by Abid Raza. The movie managed to collect more than 3 crores at the box office.