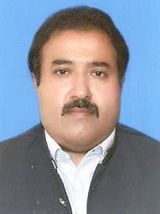 
Zeeshan Rafique is a Pakistani Politician who is serving as a member of the Provincial Assembly while being attached to the Pakistan Muslim League N for a long time. He is one of the educated Politicians of Pakistan who holds the degree of Masters. This article contains all the information about him including Zeeshan Rafique Biography. Zeeshan hails from Lahore is a Pakistani Politician who is currently functioning as a member of the Provincial Assembly after winning the Pakistan General Elections while being associated with Pakistan Muslim League N. He served as a member of Commerce and Investment in the past.

He was born on 30th June 1980 in Sialkot. Currently, he still resides there from where he also contests the Elections.

He holds the degree of MSC which he attained from Lahore.

He ran for the seat of Provincial Assembly in 2018 Pakistan General Elections from the Constituency PP-42 (Sialkot-VIII) while being attached to Pakistan Muslim League N and gave defeat to his oppœnent. He took the charge on 15th August 2018.