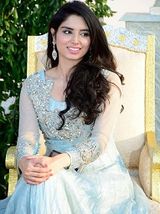 Zainab Nasir Abbas hails from Lahore is a stunning and confident Pakistani commentator and cricket presenter who has made half of the world her fan with her engaging smile and appealing personality in a short time. She is one of those personalities who often indulge herself in the controversies due to her offscreen chemistry with the cricketers on social media. Other than a commentator Zainab is also a seasonal writer for Dawn.

She was born on 14th February 1988 in Lahore, where she lives all her life. Currently, she resides in the same city Lahore.

She holds the degree of Masters in Marketing and Strategy, which she attained from the University of Warwick, England.

She belongs to a conventional and well-recognized family. Her father Nasir Abbas used to play cricket on a domestic level as a bowler. Her mother Andleeb Abbas is one of the favoured names in Politics who is currently functioning as a part of the National Assembly while being attached to Pakistan Tehreek e Insaf. She got married in November 2019 to Hamza Kardar in Lahore.