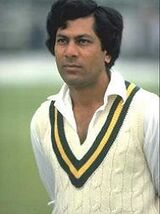 
Zaheer Abbas is an elegant, world-class batsman who represented the Pakistan team. He was a right-hand batsman and a right-arm off-break occasional bowler. As a batsman, he could take on any bowler at any surface. His classical batting form and consistency gave him the name ”The Asian Bradman”. Zaheer broke many batting records, especially in tests he would bat for hours and thus got another nickname as ”Runs Machine”. This article has all the information about Zaheer, including Zaheer Abbas Biography. He got married in 1988 with Samina Abbas who was an Indian. Her real name was Rita Luthra who later changed her name after marrying Zaheer. The couple have a daughter named Sonal Abbas, who is married to a businessman from Delhi, India.

Zaheer started playing professional cricket by playing first-class cricket from the 1965-66 season. He continued to play at his best and got into the national team.

Zaheer had a phenomenal cricketing career, whether at domestic or international level he used to be an outstanding batsman. He featured in both tests and One Day Internationals for Pakistan from 1969-85, majority of his achievements have come from playing test cricket as he played more tests than ODIs throughout his career.

As a Match Referee

After retirement from cricket, he had an opportunity to work as an ICC match referee. In the year 1993, he worked as a referee in three One Day Internationals and a Test Match.

In the year 2015 Zaheer was named as the president of International Cricket Council.