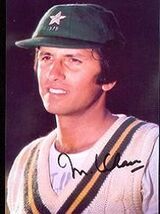 
Majid Khan is a former Pakistani cricketer who represented the national team in both Tests and One Day Internationals. He had a great cricketing brain, his shot selection used to be outstanding, and his quick reacting batting style made him a successful batsman. Though he started as a fast bowler, an injury turned his fate to the direction of batting. This article has all the information about him, including Majid Khan Biography. He was born on 28th Sept 1946 at Ludhiana, India. Currently, he is living in Islamabad.

He started his education from St. Anthony’s School, Lahore. Then he studied at Atchison College, Lahore. Finally, he graduated from Cambridge University, UK.

Majid belonged to a cricketing family where his Father Jahangir Khan played four tests for the Indian team and was part of their first test match. His cousins, Javed Burki and Prime Minister of Pakistan Imran Khan, are also famous former cricketers. His son Bazid Khan also played in the national team who is currently working as a cricket commentator.

He was a fast bowler in initial cricketing days, but a back injury lost his pace in bowling, so he turned himself as an off-spinner and focused on his batting skills. Afterward, he went on to become a batting allrounder for Pakistan.

Majid Khan had an outstanding cricket career who became the first Pakistani to hit a one-day international hundred. He did that against England as he made 108 runs off 93 balls to successfully chase a total of 245 runs only in 43rd over of the match. He was speedy in his reflexes as he once said that batting is all about hands and eye combination. He became the first batsman after Don Bradman to score a test hundred before lunch. He achieved the feat against New-Zealand on 30th Oct 1976. Majid was excellent against then campion West-Indies where he made 553 runs in a series against them.

He also led the Pakistan team in three tests and two One Day International matches from 1972-75.

After his retirement, he served as an ICC match referee in four tests in 1995. He also served as Pakistan’s Chief Selector in the year 1993. Majid also functioned as the chief executive of Pakistan Cricket Board from 1996-99, but after the match-fixing allegations in the 1999 World-Cup, he resigned from that job.