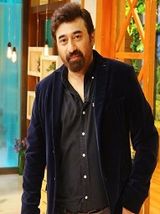 
Yasir Nawaz is a talented and accomplished Pakistani Showbiz star. He is a Television and film actor, Producer, Director and screenwriter as well. Talent runs in his genes because of being born in an artistic family. He is a husband of Nida Yasir and son in law of late Producer Kazim Pasha. This article has all the information about Yasir, including Yasir Nawaz Biography and Yasir Nawaz Family. Yasir is an amazing and multi-talented Pakistani television actor, Director and Producer who has directed and produced various Pakistani movies and television shows. Being born in an artistic family, Yasir was fond of joining Showbiz since his Childhood that he turned into reality. Yasir is likewise a scriptwriter who has written his own Lollywood movies including ‘Wrong Number.’ Yasir is known for successfully portraying a character of Afzal in superhit drama serial ‘Dil Mom Ka Diya.’

He was born on 22nd June 190 in Karachi. Currently, Yasir is living in the same city along with his family.

Yasir belongs to a notable and artistic family. His father Fareed Nawaz Baloch was a star who acted in numerous Pakistani plays and a few movies. He got married to distinguished Pakistani television host and Producer Nida Yasir in the early 2000s. They are blessed with 2 Son and one daughter. One of his brother Danish Nawaz is another prominent name of the Showbiz Industry. Danish is a Pakistani actor and Director. Yasir’s father in Law Kazim Pasha was also the public figure.

As a Producer, Yasir made his debut in 2010 with the drama serial ‘Hum Tum’ in which he acts too. He co-produced this serial along with his wife, Nida Yasir. In 2015 Yasir made his big-screen debut and co-produced his first film ‘Wrong Number’ that did a good business at the box office. In 2017 he co-produced his second movie ‘Mehrunisa V Lub U’ that also remained successful. In 2019 Yasir produced the sequel of his first movie ‘Wrong Number 2’.

As a Screen Writer